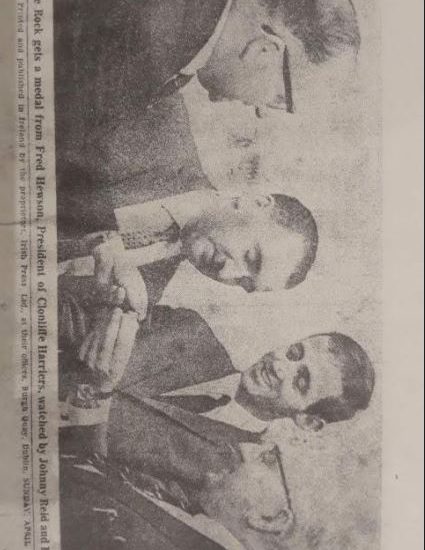 Last week the mystery of why Billy Morton was riding a scooter on the track in Santry Stadium was solved along with the other great Clonliffe mystery concerning the circumstances of why Dickie Rock was presented with a Clonliffe gold medal. As was unearthed by Dominick Branigan Billy Morton had used his legendary powers of persuasion to cajole Dickie, who at the time was possibly the biggest name in music in Ireland, to help with the club’s fundraising raffle of that scooter and had as a result generated huge publicity for Clonliffe Harriers with an appearance on the Late Late Show for both Dickie and Billy. Younger Clonliffe members may not know this but Dickie Rock was a huge star in Ireland at the time. In the 1960s he was the lead singer and front man of the Miami Showband and amassed seven number one singles (ask your parents!) during this decade and also represented Ireland in the 1966 Eurovision Song contest. In April 1966 the club president Fred Hewson as a mark of appreciation from the club presented Dickie Rock with a Clonliffe gold medal. Never one to miss an opportunity Billy Morton of course had the gentlemen of the press in attendance! This photograph appeared in the Sunday Press on 10 April 1966 showing the Clonliffe president present the medal to Dickie watched by Billy Morton and Johnny Reid who was the owner of the motorbike shop that presented the scooter to Clonliffe Harriers.