Latested news: Brian Gregan is a confirmed starter for next Wednesday’s Loki 400 at Morton Games. The Clonliffe Harrier will run his first race of the season after recovering from a long-term injury. Gregan last competed in the Morton Games in 2017 when he produced one of the races of his career as he beat a world-class field in a new PB of 45.26 and in the process he was responsible for reviving the fabled ‘Santry Roar’!.

Gregan will face another World class field on Wednesday night which includes Canada’s Graeme Thompson who has had a breakthrough season finishing 4th in the Canadian Championships and recording a 45.67 PB. Thompson is coming all the way from Canada with a target of the world qualifying time. Also confirmed is Obi Igbokwe (USA) who has a 44.94 PB and the 45.06 season’s best, the NCAA 400 finalist only in recent weeks competed in the London Diamond league where he placed 4th. 2018 European finalists Samuel Garcia (ESP) , with a 45.00 PB and Ricardo Dos Santos (POR) 45.14 and 2016 European bronze medalist Liemarvin Bonevacia (NED) are also confirmed. 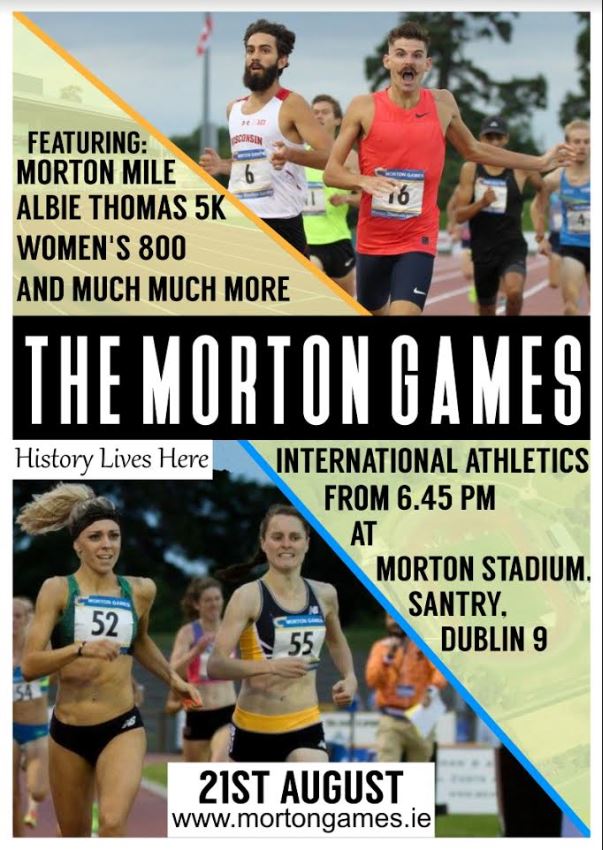 Diamond league regular Linden Hall (AUS) is the leading entry in the Fingal 1500 at next Wednesday’s Morton Games. Hall who has an outstanding PB of 4.00.86 was a semifinalist at the 2016 Olympic Games and was a 4th place finisher at last year’s Commonwealth Games. Also confirmed is Lauren Johnston (USA), PB 4.04.17, a 2015 world championship semifinalist and a finalist at the recent USA Championships. Last year’s runner-up Elinor Purrier (USA) will look to go one better this time out, on the basis of current form, with a 4.02.34 PB set this season this may be her year.

Also confirmed from the US are Cory McGee, another athlete in fine form this season having recorded a PB of 4.05.90, Katrina Coogan, who won last night’s 3000 at Cork City Sports and Elsa Cranny, PB 4.06.03.

Albie Thomas, the legendary Australian athlete who set two World Records in Santry in 1958, is remembered at Morton Games with the Albie Thomas Memorial 5000. That race brings many athletes to Dublin in search of the World qualifying time for Doha, with several of Europe’s best athletes in the field.