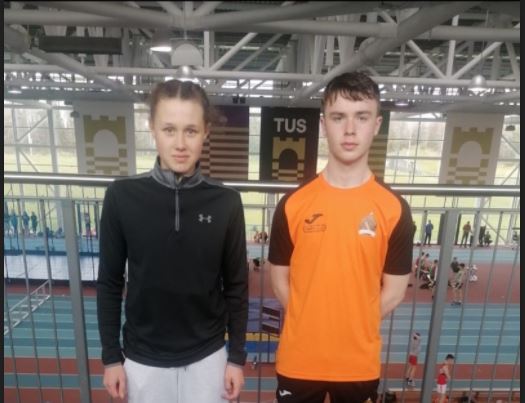 Eugenia Bateson Reports: Day 1 of the National Championships in AIT on Saturday was opened for Clonliffe with Matei Ursachi in the U16 Boys 1500m. The race was choppy from the gun with positions constantly changing. Matei worked hard throughout, as he always does,  and kept his focus and a cool head. The Cranford athlete broke at the bell changing the race yet again and leaving the pack behind wining in a time of 4:15.38. Matei who was in 7th at the bell responded to the surge.  He was unlucky not to be rewarded with a bronze finishing in 4th in 4:21.31. An impressive run and unfortunate not to get a podium position.

Ava Usanova ran in the U16 Girls 60m heats in the afternoon.  After a shaky start off the blocks, she was cautious after receiving a warning and unfortunately didn’t progress to the final with a time of 8.31.

Ava was back for Day 2 today in the U16 Girls 200m heats.  Unlucky not to progress to the finals finishing 2nd in her heat.  She was however rewarded with a pb of 26.67. The wise Joe Cooper always said, if you don’t get a medal, a pb is what you want and Ava achieve that at these National Championships.  A job well done.
Jaydon Carroll finished 3rd in his heat in a time of 24.69 and through to the final with fastest loser q.  In a time of 24.78 Jaydon is 6th U16 200m in Ireland, an impressive start to Jaydons sprint career.

U16 Boys and Girls will be back in Athlone for the National Juvenile Relays on 2nd April.