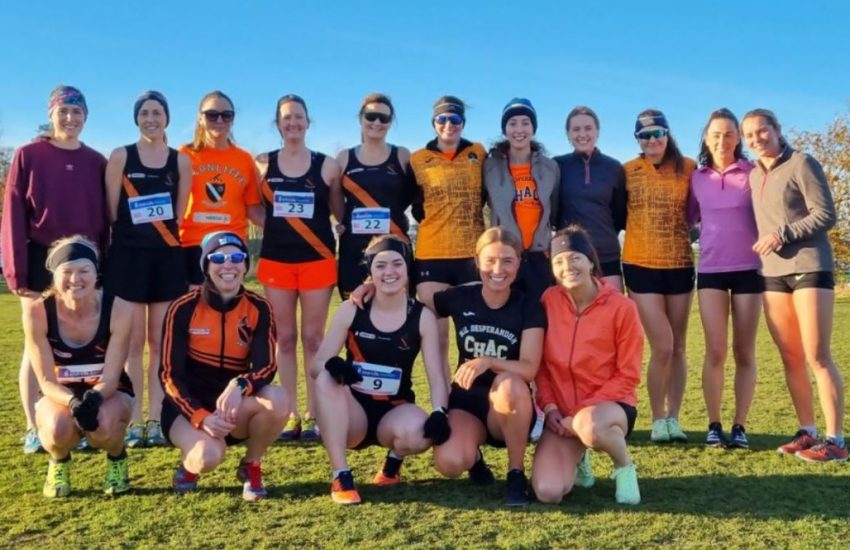 The Clonliffe women’s cross country squad put in another sterling effort in today’s national novice cross country in Gowran, Co Kilkenny just missing out on bronze by the tiniest of margins. This group have progressed enormously over the course of this cross country season and once again were right in the mix. The novice women’s race is held over 4000 M, a 2 x 2000 loop with some 150 plus athletes toeing the line including some 15 Harriers. Once again Laura Power led the team home running a fine race to finish 12th, Laura picked up intercounty silver with Dublin, next in was Laura Tuite in 29th a mere seconds and one place ahead of Kate Hawkshaw, who has scored in every cross country race this season. The fourth scorer was Captain Jenny Johnston in 44th. The team finished fourth a single point behind bronze medal team DCH, with the gold going to Letterkenny AC, who had also won the seniors in Santry a few weeks back, and silver going to Dunboyne AC. There was a very impressive run for fifth Clonliffe lady Hannah Browne in 52nd, next in was Sarah Hawkshaw 70th, Julie Larkin 71st, Megan O’Keeffe 72nd, Ciara Peelo 74th, Alannah Cooley 91st, Siobhan Devaney 97th, Vanessa Fenton 114th, Aisling Killilea 129th, Mel Curran 139th and Yvonne McDonagh 141st. The Clonliffe B team placed a commendable 11th.

Prior to the novice competition the national juvenile uneven age championships took place. The Clonliffe U/15 boys team were weakened somewhat and finished 10th with a scoring four of Matie Ursachi in an excellent 18th ( Matie led Dublin to intercounty gold), William Walsh 80th, Cathal Hickey 88th and Jack Kane 89th. The squad was completed by Issac Moses 99th and Jayden Carroll 132nd.

The U/17 girls were 12th, Clodagh Nic Dhomhnaill was a fine 36th (and scored on the Dublin team that took intercounty bronze), next in was Hazel Kenny 80th, Sorcha O’Connor 95th and Kate Faherty 108th.

The U/19 girls due to withdrawals were down to the bare minimum of three and put in a great effort to place fifth team with Naoise Cullen 41st, Lara Gallagher 43rd and in her final outing in the juvenile ranks Katie Halpin 44th.

Unfortunately the boys U/19 were also heavily impacted by withdrawals and ended up with the bare minimum of four but place a commendable fifth team. First in was Niall Carberry a fine 11th, next was Ronan Donohue 23rd, both scored on the Dublin intercounty gold winning team, Cian Murray 59th and Jack Woods 70th.