Day 1 of the Woodies DIY National track and field yielded three national titles for Clonliffe athletes and medals in four other events. First title of the day came from Tomas Rauktys in the shot put. While Tomas has been in fine form of late, the shot may not have been his favoured event, however, with a best of 17.03 he turned the table on defending champion Sean Breathnach (GCH) to reverse last year`s result. Also in the field events Simon Phelan was joint first in the high jump with St. Abbans Barry Pender with a best of 2.05m. Andrew Heney was just out of the medals after a 2.00 clearance in 4th place. 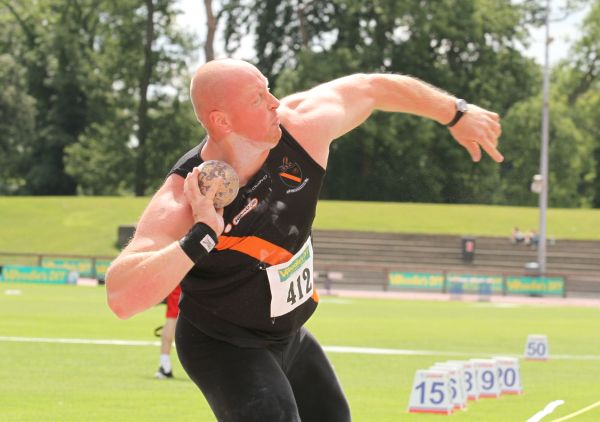 On the track Mark Kenneally ran the field ragged in the 10,000 leading from the off Mark began tightening the screw after 4/5 laps, opening a lead on Joe Sweeney and Eddie McGinley that grew and grew as proceedings wore on, at the finish Mark had lapped the entire field up to and including Sweeney in 3rd place, to win in a time of 29.21.69. An excellent run on the track also from Gary O’Hanlon (30.44.91) finishing 4th and only two seconds off bronze as he hacked into Sweeney`s lead over him reducing the gap from 100m plus at one stage to touching distance at the line.