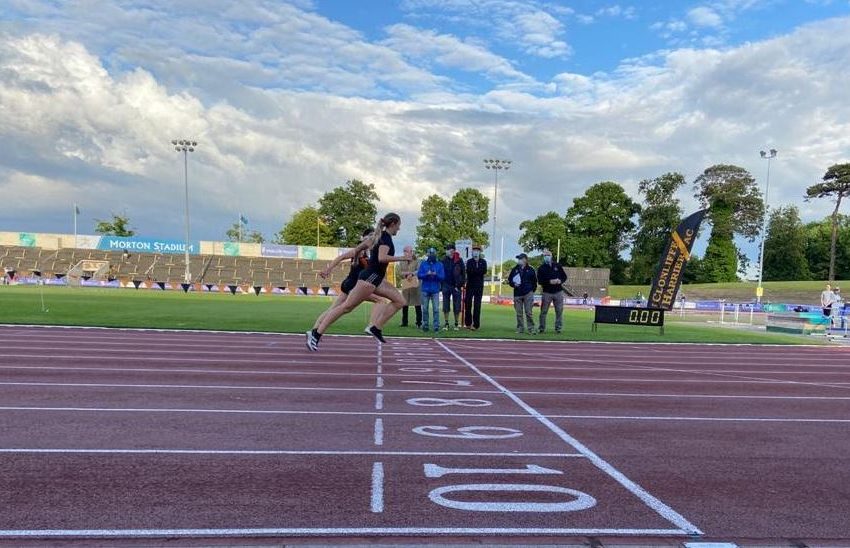 Maurice McCrohan Reports: I am writing this post long slow run and before I head into town for EURO 2020 match afternoon beers. I feel like Charlton Heston in the Omega Man! It’s safe to go into town during the day, butmust get out of Dodge before the sun goes down when the crazies take to the streets.

It is great to be back training with a group and having a group for long run .The long runs solos of
January and February hopefully will not return as I have my full vaccine superpowers!
Eugene’s training group has grown with the arrival of 3 newbies, all bristling with potential and
sponges for training tips. In a case of you can have too many experts ,we have ended up confusing one of them in relation to footwear for track and short distance races. One camp was the use ASICS DS RACERS and trainers, light on foot are best for speed. The other camp were the I believe I can vapor fly camp! Vapors cushioning brings you speed. Either way, the newbies have added an expense to their budget, which they may not have anticipated. The other good news from the club point of view , which would have Captain Joe Cooper (RIP) smiling down on us is he has 3 new runners without a track record and thus eligible for the Novices!

As my own career has entered the winter solstice, I have embarked on the new road of a helper and
running race official. I answered the call of Noel for helpers at the Club race nights and attended
both weeks’ sessions. I had the simple task of pointing runners towards the finishing chutes. I have a few steps to travel before I am the Mick Kearney, RD.!

The second duty was a bit more taxing. We needed 8 of us for the lane races to take the names in
the finishing spots .Would it be straightforward to decide who takes which? Wrong!
The more experienced stewards took the lead finishers in case of a medal dispute.
, But place 5, 6 7, It was like the gangsters Mr Colour debate in reservoir Dogs. I am 5 .No I want to
be 5!

The races were great fun close up. You really get to see the efforts. The sprint races did not need
photo finish disputes thankfully .Each graded distance race had its own narrative. The elite races
were very close at the front. The others may have had the odd runner who should have raced up or
down. Special mention to Scott Crowley in the 1500 that came from out the back on the bell lap to pass the
field to win his 1500 race. A track and short distance career emerges for Scott?

Phillip O’Doherty put in a great 800 race finish and there was a faller near the finish in one of the races.
But as the song says he got knocked down but get up again and only lost a couple of placing!!
The race nights were enjoyable and I will be there for the 5k night!
Maurice “mo “ McCrohan