Maurice McCrohan: This blog will be like a joint HBO/Sky Atlantic production in favour of my two running groups, Clonliffe Harriers and TT racers. I will leave my third running group River Valley Park Run out as that would just really confuse.

The real countdown to New York started during my vantage point at the 800M from home cheering on the Dublin Marathon  .Shouting encouraging to my close running pals and training partners .I realised this is my next week!

Pre marathon week was a treading on egg shells, avoiding injury kind of thing. All was going well, until I stood barefoot on a three pin plug the day before travelling! There really is only so much pain a man can endure!

I ran a few miles to keep me sane, got a sports massage, and ate more than usual, but not too much more crap than usual. I did also drink soya milk lattes in reverence to my Sunday vegan training partners, Eimear and Kieran!

The St Lukes marathon fundraiser has led to even more well-wishers than usual. But like Harry Potter and the Muggles, I dealt with many strange questions from Non-runners (Ruggles?) who just don’t get us. . They ask question such as;

Ruggle: “Are you running the Marathon? YES.

Ruggle: What’s it like to hit the wall? That’s actually not a bad question?

Ruggle: If I start training from scratch now, could I run a marathon in 6 months? Yes, But, it might hurt a bit!

Ruggle: How much times do you run a week? When I answer the question they suddenly change the subject to Ryanair, crazy people you meet on the Luas and do use Air BNB?

So I set off with the family for NYC on Friday 2nd November. Our hotel Radisson Martinique was in a great central midtown location. Security on the door 24/7 to deal with any “walks ins” issues.

I recalibrated my bearings on Saturday morning and found the route to the NYC Marathon Expo via breakfast at a classic diner Tick Tocks.The Expo was slick, commercial, but a tad expensive if you wanted the official race souvenirs. The Dublin marathon stand was unpersonned when I went past at 09.15am.They must have had a good night out?

Saturday afternoon was spent on a pilgrimage to the greatest Arsenal supporters bar in the world. The Blind Pig in east village. The difficulty on arrival was that its reputation precedes tithe bar was far too busy too comfortably watch the match against Liverpool.

My pre-race meal was the one bad meal we had in NYC.An inedible pasta in TGI Fridays (I am building here..!)

Further disaster struck that night. Pre-race porridge is part of my marathon routine. However, the Radisson did not start breakfast til 6.30am.

Was there a night porter, I asked? Not at 5am?

Do you have a microwave, I can access at that time? No sir!

So, in the city that never sleeps, I was stuck with the one hotel service that can’t get out of bed?

So, there I was at 5am evening a cold museli breakfast. No porridge. I was like Dumbo without the nose peg! How was I going to perform?

The logistics of NYC Marathon are such that you have to raise very early.50k runners have to get across to the Staten Island race HQ. I was at the Ferry terminal at 5.30am, four hours pre-race. The transfers ran very smoothly.the race village well lay out, But, we were fortunate weather wise. A cold wet day would be horrible there.

Another downside is there no room to warm up, so after 3 hours standing or lying around it is straight into it running up and across a spectacular bridge!

My fellow runner from TT Shane “the post man “ McCauley was on the orange start ,parallel to the blue elite start, Due to the lane stagger effect ,he  had  his 15 minutes of fame, as he was parallel to    the lead pack early on!

The crowds were amazing in Staten Island, Brooklyn and Queens during the first half of the race. My energy levels dropped at half way which I had reached at 1.35ish.It was not the day for heroics, So, I switched  my cheap Casio watch back to zero and ran 2nd half as a timed run.

There was one more gruelling bridge at 16th mile before you hit a wall of noise on 1st Avenue.  We touched on the Bronx around 20 miles before a great buzz of music ad noise as we ran through Harlem.

I was out on my feet at 21miles. The eyes were delirious. .I thought I saw a sign saying Meath GAA on tour but, it was actually a Billboard for Mean Girls the Musical! 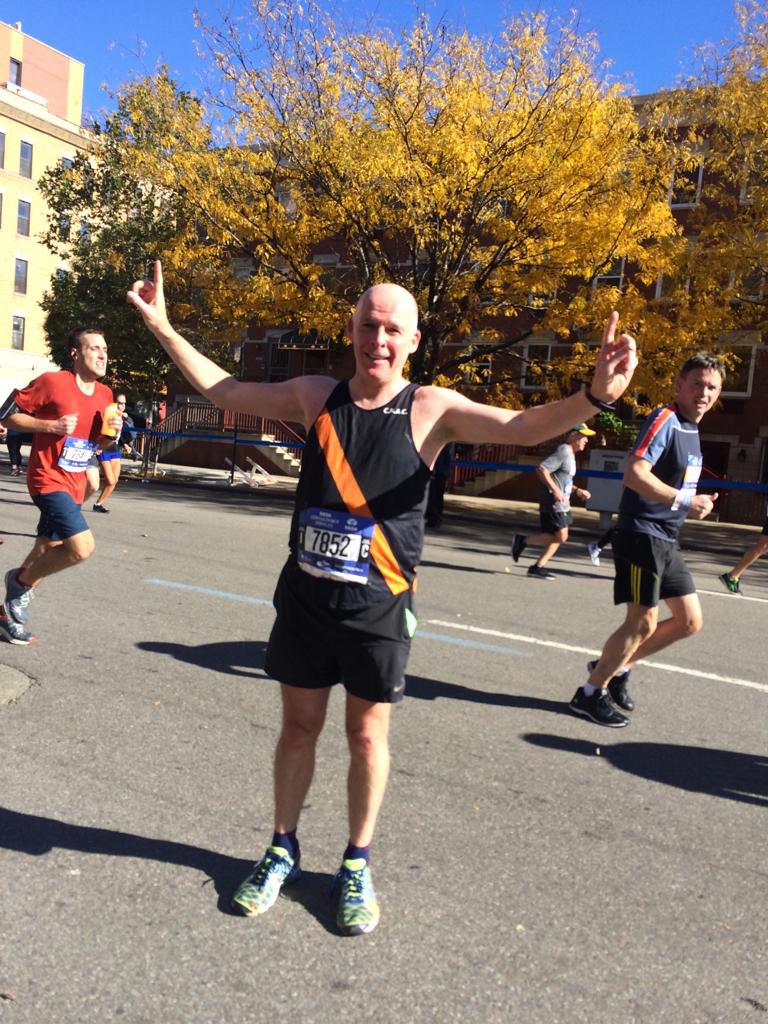 I parked at 22.5 miles as I spotted Kieran Murphy; He was all set for revenge for my blasting his good ear out 800 M home in Dublin. Kieran knew from my demeanour, not to kick a man when he was down. I broke the running ice and said, “just take a photo my time has gone! “

I trudged through a wall of noise in Central Park, going out the back by the minute. I crossed at 3, 32 Not one of my better days!

The running gods were still taunting me after. My baggage truck was the furthest away from the finish. I then had to get back to Columbus circle to meet the family, an hour over the scheduled rendezvous, with no we fi connection to contact them!

I was at 78th trying to get to 58 Street. The long walk started until I started negotiating with various rickshaw drivers! I negotiated a cheap rate and eventually got to meet the family. By them Shane “the postman” MacAuley had delivered a 2.54 and was tucked up in bed in his Air BnB!

That was my second NYC. The long day and bridges make it a difficult course. But, the crowds make it one of the best experiences you will ever have.

We had a ball on the trip. We met Shane and motivator Kieran for dinner in an excellent Italian restaurant near Times Square. I had forgotten the pain mentally, if my legs had not physically! Onwards and upwards, I am in the lottery for Berlin 2019.As for Dublin, the competition at Male 055 Is not letting up at all.

I thoroughly enjoyed the training year with the old and the new training colleagues. Running was a great stress reliever in a difficult year personally. My family are overwhelmed at the response to the St Lukes Oncology fundraiser.

The link is attached  if you still want to contribute   https://www.idonate.ie/MauriceMcCrohan