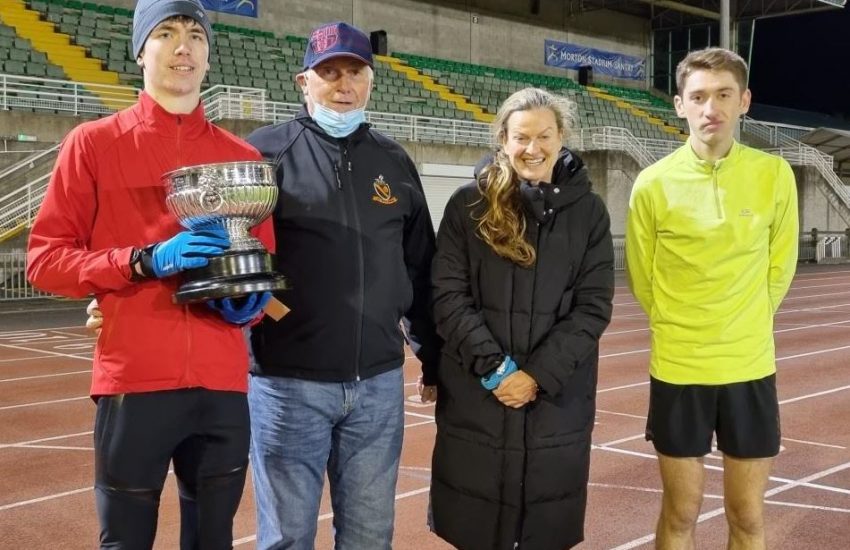 Tonight’s Walker Cup 4 mile track race was a cracker. Although Dublin saw a big drop in temperatures this evening it was not so in Santry as the athletes raised the heat scorching around the famed Morton Stadium track. It proved to be a brilliant club night.

With several of the senior cross-country team running it was always going to be a fast race and a battle royal between training mates. Sean O’Leary threw down the gauntlet from the gun with a 63 second opening lap. The rest of the field resisted resulting in Sean opening a substantial lead over the first half of the race that grew to possibly 70 m at one stage. The chasing group was headed by Ben Guiden who calmly began reeling him in. Sean Doran held onto Ben’s shoulder running a fine race, likewise Stephen Cashin was putting in a great nights work, these four having broke away from the rest of the pack. With a little less than two laps to go of the 16, Ben caught Sean and swept past pushing all the way to the line to win in an impressive 19.29. Sean held onto second running 19.40 with Sean Doran five seconds later, 19.45. Impressive running to have three athlete in a club race break 20 minutes for the 4 mile distance.

Just a fraction outside the 20 minute mark was Stephen Cashin (20.03). Clonliffe newby Darren O’Dwyer, a junior athlete who only joined the club in recent weeks put his disappointment of last Sundays’ Autumn Cross Country behind them to run a fantastic race which included a 5000 PB en route to a fine 20.37 in 5th place. To crown a great night for the newest Harrier in the field Darren also won the handicap to take the Walker cup itself. Another relative newcomer to the club was fastest woman Vanessa Fenton (26.01).

Throughout the field all put in great efforts. The presentation was made trackside by club president Paddy Marley of the Walker Cup to Darren on what hopefully will be the first of many victories and to the fastest man Ben and fastest woman Vanessa. Once again thanks to the athletes for their cooperation in respecting the Covid protocols and a huge thank you to the officials who as always make these club races possible.