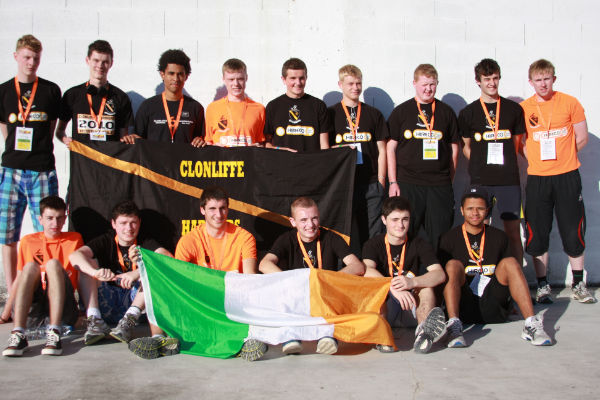 Liam Ashton reports: A 15 strong team met at Dublin Airport at 8am on Friday morning with high hopes of what the weekend had in store for us.  Due to the lack of hurdlers in the junior section of the club, Joe called upon the assistance from outside of two well established athletes in Joshua Essuman and Eoin Power, to run in the black and amber strip.  As the day progressed we got to know our team mates a lot better, some of whom we were meeting for the first time.  After several hours of travelling and many litres of water later, we checked into our hotel rooms in the centre of Leiria. We then travelled to the stadium via shuttle bus where we went through our pre-race routines and got a feel of the track.

As the bus approached the front entrance many of us were astounded at the sheer size of the structure. From the outside it looked as though it was put together with Lego blocks!  We soon walked through a dark tunnel and out to the track where I stood in awe, as I scanned the 23,000 seater stadium.   At the group meal that evening we got a chance to ‘suss out’ the opposition and get an idea what we were up against. A few comments from the Danish team, thrown in the direction of the team supervisor Noel, didn’t knock our focus.  We turned in early that night ready for the challenge the following day.

There was an early start on Saturday and after a less than satisfying breakfast of bread and butter, we soon assembled at the front entrance of the stadium in our black Clonliffe t-shirts, with our heads held high, prior to the opening ceremony.  Team Captain and High Jump specialist Andrew Heney came prepared, taking out an Irish tricolour from his bag as we began to walk out onto the track.  There was a great sense of pride and privilege amongst the team, in getting the chance to represent our club and country at such a prestigious event.  While some of the team members including myself were getting a bit phased by the opposition and anxious about the event, experienced athletes such as Fintan Doherty and Stuart Roche, kept us focused on our task at hand.

It wasn’t long before I began my warm up, in the warm up area across from the stadium, which gave me a chance to mentally prepare to race in 35 degree heat.  Soon after this I was sitting in the Call Room with my spikes on, ready to go.  The 20 minute wait seemed agonisingly long and as I sat there with the other seven , 800m athletes, keeping an expressionless poker face.  We followed a stadium official down the track parallel to the home straight. I took my mark in lane 1 with the infamous butterflies in my stomach! The race was won in 2.00 with me finishing 5 seconds off the pace, coming in 5th.   Some of the highlights from the morning session included Simon Galligan finishing 4th in the hammer event.  He gained valuable experience competing “inside” a stadium for the first time in his career.  Clonliffe’s  fastest junior athlete, Keith Pike,  gave a great account of himself in the 100m finishing an impressive 3rd.

The evening session gave the Clonliffe camp something to cheer about with the distance athletes producing the results.  Eoin McCullogh gave a heroic performance in the 3000m steeple chase.  After falling at the first barrier he continued as if nothing had happened, catching the leading group within seconds.  When it looked like a top 3 finish had slipped from his grasp he gritted his teeth and put the boot down producing a Farah like finish, to steal a top 3 placing.  Aaron Hanlon and Ian Guiden soon gave great displays of front running, winning the 1500m and 3000m respectively.

The closing ceremony gave us all a chance to swap gear with other teams, and have a chat with them, about the day’s events.  We also got a chance to mingle with more athletes later that night, which was really interesting, despite the language barrier.

The weekend gave us all a great opportunity to gain invaluable international experience and also, to develop a bond between the sprinters, distance runners and field eventers.  On behalf of the team I would like to thank Joe, Gladys and Noel for a most memorable and enjoyable weekend.