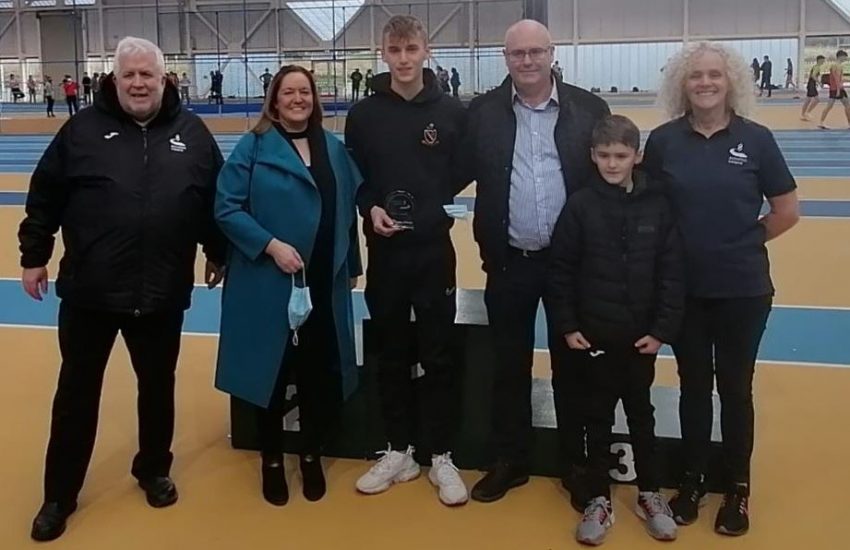 Eugenia Bateson Reports: At the Dublin Indoor Championships in the NIA Abbottstown, proceedings were brought to a halt to recognise one of our very own and finest athletes. Sean Cronin received the 2021 Juvenile Star for County Dublin from Athletics Ireland in the presence of his proud family, peers and clubmates.

Evelyn O’Reilly Chair of the Juvenile Committee of Athletics Ireland advised that one athlete from each county receives this award based on their performances at National competition. In her words: “Sean was awarded the 2021 County Dublin Star award recognising his Gold medal in the National 1500m outdoor Track and Field Championships, Silver Medal in the 3000m outdoor Track & Field and Gold Medal in the U16 Cross Country Championships in Santry.  Following his win in Santry, Sean was selected on the Irish U17 Celtic Cross-Country Team which competed in Dundonald, Belfast on January 22nd where he led his team home to a Silver Team Medal.  Sean finished in 5th Place in a competitive International”

Sean started running Park Runs with his dad and joined Glady’s group as an U8 having realised that he had a love and a talent for running.  Moving through the coaches he is continuing to improve under the top class coaching of Mick Fogarty and is going from strength to strength.  Sean will compete in his home ground of Santry Demesne in the schools Leinster Championships on 16th of this month.  We wish him continued success as he strives to achieve his dreams and goals.