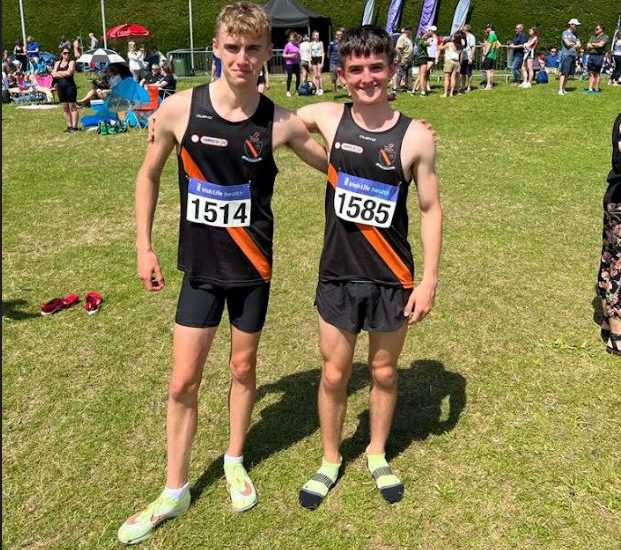 Eugenia Bateson reports: Day 2 and 3 of the National Championships now complete.
The highlight of the weekend for Clonliffe was U17 1500m with Sean Cronin and Lorcan Benjacar.  A very competitive and tough tactical race.  Lorcan Benjacar had a fine race finishing in 6th in a time of 4:11.91.  Sean Cronin was sitting comfortably at the bell.  At around 250 he made his move and took total control of the race with yet another impressive win in a time of 4:06.11
Matei Urscarhi competed in the 3000m in Day 2.  A gutsy performance he managed to break a group of 6 down to 4 but the break didn’t hold for him.  Having done a lot of the graft during the race, he was unfortunate to finish 5th in a time of 9:24.87.
U17 girls 3000m gained national experience for Hazel Kenny
Also in U16 races were Rory Quill in the 1500m finishing 12th in 4:27.86.  Great experience gained by Rory which he will no doubt build on as he continues to improve.
U16 Girls Sprints – Ava Usanova was successful in making the finals in both the 100m, finishing 6th in 13.13 and finishing 8th in the 200m in 26.83.  Rebecca Walsh, better known for her middle distance running found herself making it to Nationals while working on her 200m kick finish.  Rebecca finished 6th in her heat in 27.11.
U16 Boys Sprints – The talented Jaydon Carroll finished 2nd in his 200m heat in 23.71 and 6th in the Final in 23.70.Fantastic to see two compete in the High Jump, with Jack McDonald in U16 and Christopher Lynch in U17.  Both cleared 1.50m in this new event for them and definitely exciting to see some field events coming through in the Juvenile Section.
U19’s were represented on Day 2 by Naoise Cullen who finished 6th in her heat in her National debut in 400m.  James McDonald finished 5th in his heat in the 400m obtaining a small q in a time of 53.68 but not feeling on form did not compete in the final.
Apologies for any omissions.
And so the Track & Field Season comes to a close for individual events.  Good luck to U16’s and U17’s in the relay’s next week.
Enjoy the summer break for those whose season has finished.  Looking forward to Cross Country Training already!
Nil Desperandum