The third annual Clonliffe Harriers Athletes awards night took place in the club bar last night, December 13th with a great turnout of club members. It was a night where Clonliffe celebrated the achievements of our athletes throughout the course of 2012.

The night commenced with presentations being made to athletes who had set new club track and field records in the 2012 track season. There were no less than fourteen new club records set this year by seven different athletes. The most prolific record breakers in 2012 were Brian Gregan who pulverised the 400m record on no less than three occasions subsequently lowering the mark to a world class 45.61 and Matt Field over the 110h. Presentations were made to the following athletes who set club records:

Presentations were then made to the following athletes who had won National Senior Track and Field titles:

The awards for athletes of the year were made as follows:

Women’s Track and Field athlete of the year – in setting two 5000m PBs, firstly 16.19.83 and then in August reducing that to a new club record of 15.49 and winner of the British Universities 10,000m Championship – Sara McCormack.

Men’s Track and Field athlete of the year – a superb season winning international races and then qualification for European Championships, in the European Championships he produced thrilling performances over 400 metres running a PB and qualifying for the final where injury prevented him from winning bronze, at the Morton Games he won the 400 from an international field setting another PB and club record of 45.61 and then that never to be forgotten National League final winning the 400m, 2nd in the 100m and then winning a fifth National title for Clonliffe in the 4 x 400m – Brian Gregan.

Men’s Road/Cross Country athlete of the year – winner of National 10,000m Road Championship, torch bearer in Dublin of the Olympic flame and in 2012 became an Olympian competing in the London Olympic Marathon – Mark Kenneally. 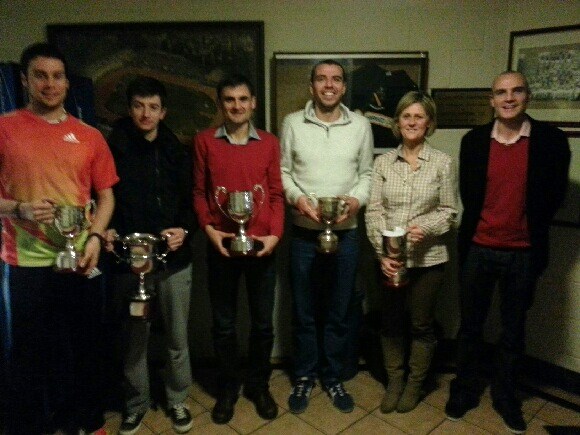 A special presentation was then made by the President Paddy Marley to Frank Behan. The Colonel has been a member of the club for more years than anyone can care to remember, he is always available to help out in the hosting of any event by the club and in 2012 successfully completed his 32nd Dublin City Marathon and also won National O/70 National Marathon gold.

The President then made special presentation of Clonliffe gold medals to firstly James Nolan to mark his achievement and by way of appreciation of his role as manager of the Irish Paralympics team in London 2012. A Clonliffe gold medal was then presented to Mark Kenneally by way of acknowledgement of him becoming an Olympian in London 2012 and to Alistair Cragg, collected on his behalf by Joe Cooper, by way of acknowledgement of him having competed in three successive Olympic Games. Alistair had sent a message to the club: “Thanking the Clonliffe family for this award. You have always been my home when I’m back in Ireland and I am honoured to accept this award, logistically I am not able to make it back to Ireland and Joe is the perfect fit to accept the award on my behalf. Thanks a million”.

This brought to a fitting end an excellent night thoroughly enjoyed by all in attendance.

Finally Clonliffe would like to acknowledge and thank sincerely Loki Sports for their very generous sponsorship of the Clonliffe Athletics Awards for this third successive year.