Eoin Murray reports: The Grand Prix series continued last night on the track with the running of the Walker cup over 4 miles. A total of 33 athletes started the race in misty conditions, with little wind which made it a reasonably good night for running.

The Walker Cup was presented to the club some 47 years ago in 1966 by the Walker family. The Walkers have a long association with Clonliffe Harriers and the Walker name in woven into the history of the club going right back to the early years of the black and amber.

Darren Reilly hit the front from the off and was not to be caught. Darren opened a sizeable gap on the rest of the field and finished in an impressive 21.23, with Tom Sherlock finishing in second place in 22.01 and Sean Doran in third place in 22.15 with Ernie Ramsey returning from getting married to grab fourth just  ahead of Philip O’Doherty.  First Lady home was Rachel Wisdom continuing to show good form in a time of 26.06.

Thanks to the Grand Prix committee for sponsoring the race, the officials for helping out on the night and to Caroline for the very welcoming tea, coffee, cake and biscuits.

The winner in the handicap in the Grand Prix series was Shane Casey, who would have been in the prizes in the last race (the 10,000 metres) only to get the lap count wrong. No such problems this time as he finished comfortably ahead of his predicted time. Paddy Marlay the club president was on hand to present the Walker Cup to Shane. Emma Dunne took second place with Sean Doran in third place. 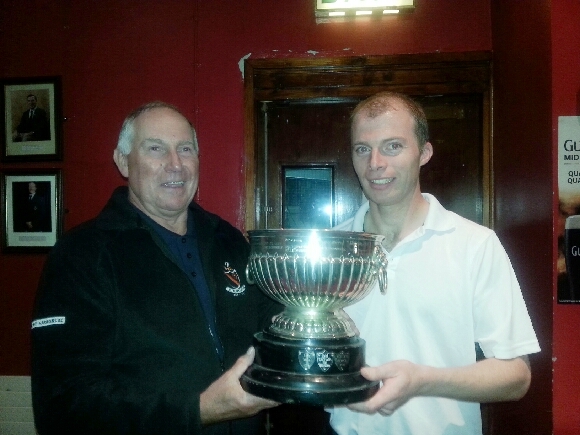 The next Grand Prix race is the 10 mile Ahern cup in Malahide on Saturday 4th October at 12.00. Note that the Club XC championships are on this Saturday in Santry Demesne.