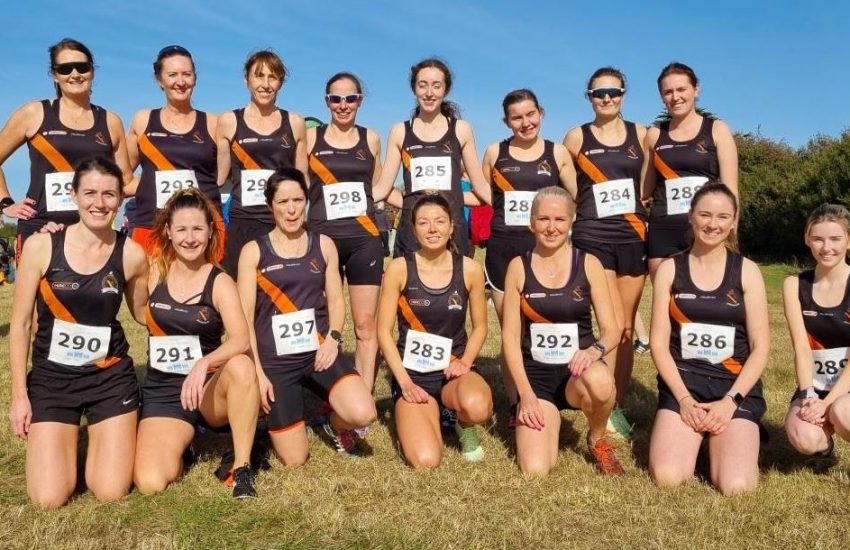 The cross country season 2021 thankfully got underway today at Tymon Park. The beautiful autumnal sunshine raising the spirits as normality begins to return to our sport with the traditional season opener the Dublin Novice Championships.

The women’s team were out in force with no less than 16 black and amber clad athletes lining up for the 4,000m race, three laps of the course. From the off the Clonliffe athletes were well to the fore as Laura Power lead over the early laps accompanied by Kate Hawkshaw a few metres back and the rest of the team packing well. As the race developed it was clearly going to be a battle between Clonliffe and DCH for team honours. Laura Power ran a superb race to claim individual silver. Kate Hawkshaw endured a torrid final lap suffering from extreme exhaustion, her legs went over the final 400 but she showed unbelievable determination over the final 100 as she hit the deck some 40m from the line but she dragged herself back up and across the line to finish 12th. Over the final lap Julie Larkin came through the field brilliantly to claim 9th position and then down the finishing straight Ciara Peelo picked up a number of places to finish in 15th. These four took team silver behind DCH and well clear of Raheny Shamrocks. There were brilliant runs by the rest of the team, Hannah Browne in particular having her best cross country race ever to finish 16th, Megan O’Keeffe 17th, Siobhan Devanney 23rd, Sarah Hawkshaw, who had ran herself to a standstill, was 32nd, Aisling Killilea 42nd, Emma Harding 50th, Laura Kernan 51st, Aideen O’Connor 70th, Kate Connell 76th, Mel Curran 78th, Yvonne McDonagh 86th, Tess Loftus 87th.

Ben Guiden had a very fine run indeed in the novice men’s race over 6000m having got a good start and positioning himself well, along with Stephen Cashin, in the lead group, as the race wore on athletes were dropped off the lead pack until the Raheny pairing broke away from the pack to claim first and second positions. Ben ran on strongly to take the bronze paying third position. Stephen finished 13th, next in was the evergreen Niall Sherlock in 31st and James Murphy in 37th made up the scoring four. The team however finished a mere three points off bronze in fourth position as Raheny for the second week in a row took the spoils. The rest of the Clonliffe contingent were: Paul Keenan 47th, Dermot Buckley 48th, Georges Legentil 51st, James Dunne 60th, Mick McMahon 63rd, Peter Bissett 80 seconds, Eamon O’Neill 117th and Niall Markey 129th.

All in all a positive start to the cross country season, next week will see several of the squad in action at the autumn cross country in Abbottstown and then moving on to the Dublin junior and senior cross-country on October 31. As for the novice cross country teams they now focus on their preparations for the national novice on December 5.