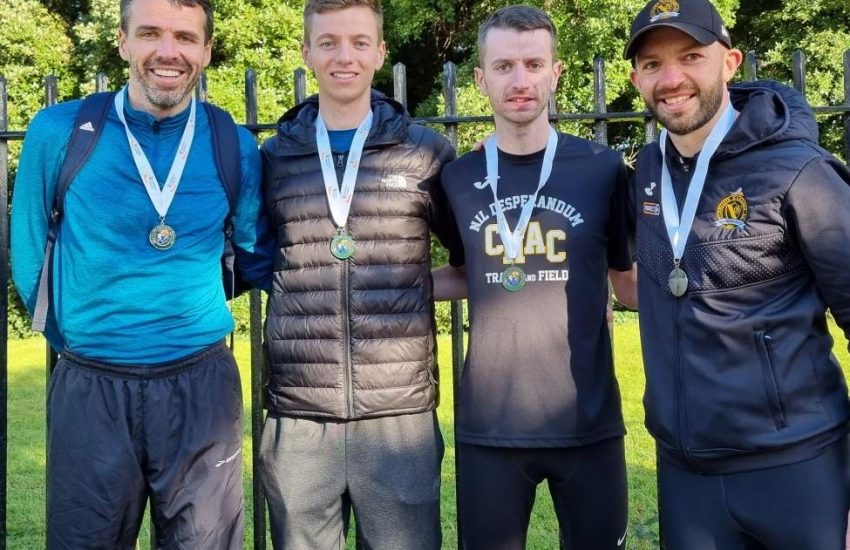 The national road relays in Raheny have not exactly proved to be a happy hunting ground for Clonliffe Harriers in recent years with bronze for the senior men in 2019 being the best return of late. As we start to get back to some degree of normality it was great to be back in the “Lions Den” with several Clonliffe teams giving it a really good shot as the senior men this year took silver whilst the men’s O/50 team did likewise.

Although official results have not as yet been posted from a Clonliffe perspective it was a pretty positive day. The master women got proceedings underway with three W35 black and amber teams taking to the start line. Great battling performances by all of the athletes over the 1 x 2 x 1 distance, once again it was the ever popular 2 mile the proved to be the winning or the beating of many teams. The A team of Joyce O’Hare, Sinead McDermott and Siobhan Devanney finished in 5th place followed in by the B’s in 6th: Emma Byrne, Maura Matthews and Elaine McLaughlin with the C team not that far off: Laura Kernan, Mary Ketterer and Aideen O’Connor in 8th.

The club fielded two teams in the master men’s race over the same distance, the M35 put on a great performance and were in the hunt for honours right until the death, eventually placing a battling fifth. Fine performances by the trio of Niall and Tom Sherlock and Dave Brady. Dave in particular deserves great credit for stepping down from his normal race distance of almost 25 miles longer to run the mile leg!. The M50 team were rewarded for their brilliant running by taking national silver: Dave Dunwoody, Declan Power and Declan Grant.

The senior women suffered a bit of a body blow with the late withdrawal of illness victim Emma Mitchell meaning that a re-calibration of all three teams entered was required. Unfortunately with no reserve available it meant that the C team could not be fielded but kudos to Meghan O’Keeffe and Aisling Killilea who provided their full support to the A and B teams. Both teams impressed enormously, it is significant that from the six athletes three were making their Clonliffe Harriers debuts. The A team of Jenny Johnston, Laura Power and Laura Tuite finished 7th with the B team of Sarah and Kate Hawkshaw and Julie Larkin 10th.

On then to the final race of the day the senior men competing over 2 x 1 x 3 x 2 , again a bit of a late hammer blow with the withdrawal of Efrem Gidey again requiring adjustments to the team’s. Jonny Whan was the leadoff leg handing over in third place to Mark MacDonald for the mile, Mark held his position and then passed on to 3 mile man Ian Guiden, Ian did not make any inroads into the lead pair although he did close the gap slightly on the Rathfarnham athlete, running the anchor leg and making a most welcome return to the Clonliffe colours was 2012 Olympian Mark Kenneally who ran an excellent leg over the 2 miles to overhaul Rathfarnham and to take the team home in silver. The B team gave some welcome experience to some of the Clonliffe up-and-coming young athletes: Niall Carbery, Georges Legentil, another making his Clonliffe debut, Sean Doran and Dermot Buckley.

Results are on athleticsireland.ie, although they are incorrect!