County Sligo in the shadow of the great Benbulbin the St. Aidans senior boys were equally great as they successfully defended the All Ireland Title. Lead home by the magnificent pairing of Cathal Doyle 6th and Brian Flanagan in 8th the red and white vests were inspired and simply blew the opposition away with a resounding 40 points win. 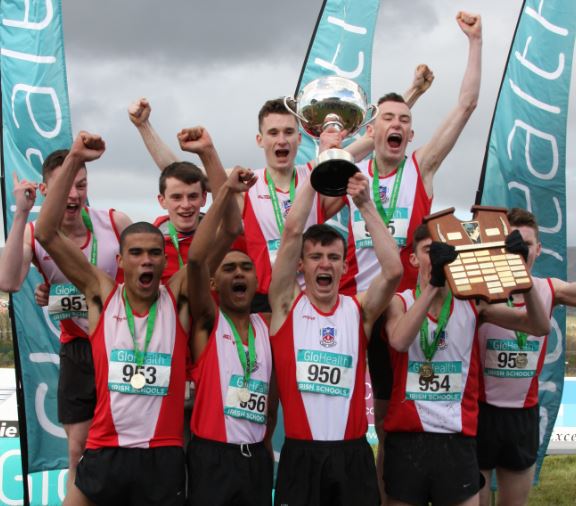 There were fantastic performances by all of the lads with Adam O`Brien once again very solid in 14th place and as always in team races a team is only as strong as it`s 4th scorer that man being Sean Carrig in 29th. These four have been backed up these past 2 years by an extremely strong squad and all equally deserve great praise: 42nd Joseph Hession, 47th Alex Gibbons, 49th Thomas Ward, 51st Greg Hossenny and reserve today Kevin McKenna. Great praise also of course to the one and only Alan O`Neill. Another proud day for St. Aidans and Clonliffe Harriers.

The All Ireland schools had kicked into action several hours earlier with a great number of the club`s athletes in action. The early arrivals witnessed a brilliant run by recent new recruit Colin Sweeney who had an outstanding run for Ard Scoil Ris with a magnificent 3rd place in the minor boys race.

An equally superb run came in the junior girls race from Amy Hodson who excelled today in a big field in her first All Ireland schools placing a very impressive 12th place.

In the Junior boys race Aaron Cullen put recent illness to the back of his mind with a very positive race to finish in 22nd place, Ian MacAlweaney also put in a very good shift in this race in 41st.

The Inter race again provided much Clonliffe interest with Sean O`Leary once again producing the goods to place a superb 5th, picking up maybe 3 places on the final long up hill drag. Alex Hogan ran well after an injury plagued season in 25th with Ben Guiden and Daniel Lacey  in close proximity in 35th and 37th. Jordan Byrne was next in placing 57th, Fintan McManus 71st and Jack Horan 76th.

All of our athletes have trained and raced hard over a very long cross country season for club and school that started way back in September. To get to the All Irelands is an achievement in itself and to have preformed so admirably today is as impressive as Benbulbin itself.