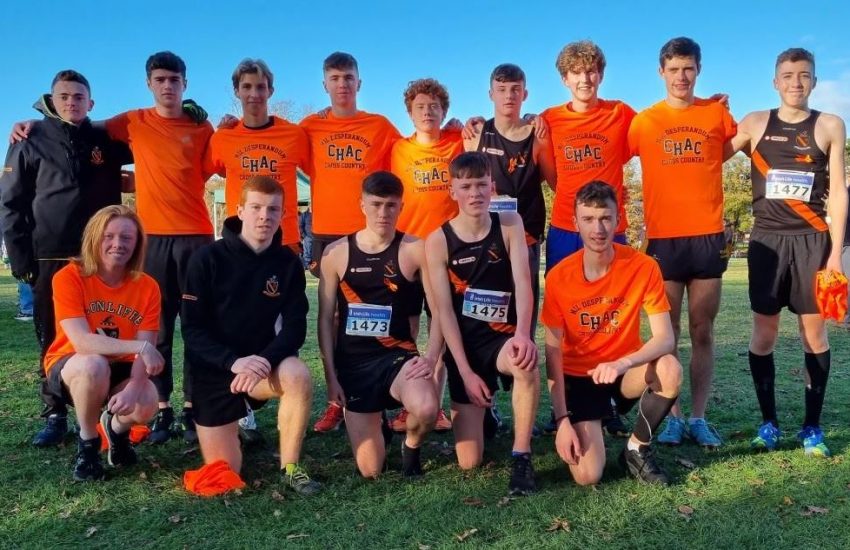 Declan Power Reports: After a hiatus of two years due to global pandemic-induced restrictions, the National Cross-Country Championships took place on Sunday in glorious Autumnal sunshine in the familiar confines of
Santry Demesne, a stone’s throw from the home of Clonliffe Harriers. The heightened anticipation
coupled with the clement, albeit brisk weather conditions attracted a large crowd to watch a series
of great races, from Under-12’s right through to the Seniors. Most of Ireland’s finest athletes were
on display with the carrot of making an Irish team (Junior or Senior) for the upcoming European
Cross-Country Championships to be staged in the National Sports Campus, Abbotstown on
December 12th. Finishing in the top 3 on the day would be enough to secure team selection, with
remaining spots at the discretion of the selectors. As the saying goes, “you need to be in it to win it!”

Clonliffe having taken on the job of hosting the 2021 nationals as always took to this task with gusto. The hosting of the nationals is not simply a matter of providing a course but involves the liaising with the local authorities, the course designing, the course measurement, the course mapping and then the huge task of building the course itself. A great turnout of club members on Saturday from midday until almost nightfall meant that the back of the course construction was ‘broken’, this dedicated crew of volunteers were out again today at daybreak to finish off the course building and then marshalling of the troops to come along and provide stewarding duties for the nationals to ensure a safe course for both competitors and the huge throng of spectators. Our club members answered the call to volunteer in droves, doing everything they could, in partnership with Athletics Ireland to put on a successful event for athletes and spectators alike.

Clonliffe has had some success down through the years on ‘home ground’, taking Senior Men’s Club titles in 1986, 1992, 2009 (inc; Junior Men) and later in 2009 hosting the European Championships where fittingly
our own Mark Kenneally finished best of the Irish in a superb 8th place. We hoped 2021 would
produce some gold or other hardware on the day, and we were not disappointed. It should also be
noted that this would be the first national cross country since the very sad passing of several
Clonliffe Harriers, in particular our long-time club captain Joe Cooper. In honour and memory of Joe,
all of the Clonliffe athletes teams competing on the day wore orange ribbons in recognition and
support of Leukaemia Awareness.

After the completion of the U12 and U14 juvenile races, we saw the first Black & Amber athletes line
up in huge race fields for the U16’s. Starting with the girls, the race was won in dominant fashion by
Lucy Foster of Willowfield Harriers, Belfast. Our Clonliffe girls finished 107th Hazel Kenny, 130th Sorcha
O’Connor, 141st Rebecca Walsh, 148th Sarah McDonnell and 151st Kate Faherty.

In the Boys’ race, Clonliffe competed valiantly to secure Club Team Silver, with Lorcan Benjacar
(27th), Devan Morrissey (35th) and Matei Ursachi (40th) all scoring and supporting Sean Cronin upfront who kept in touch with the leaders throughout and in the last 800m drew next to Daragh
Mulrooney (Moy Valley) and managed to sprint clear in thrilling fashion to take Individual Gold! A
terrific performance and all the more special to win on home soil. Several of the team just missed
out on County honours as the Dublin team finished 4th. Oran McGowan (59th) and Tom Breslin (70th)
rounded off a great day overall for the U16 team, all finishing well up in a large field.

The Clonliffe Junior men have some form in these Championships, taking a memorable national
team gold in that stellar year of 2009 and more recently 2018 and 2019. A strong team of young men lined up in the Black & Amber this year for the 6000m course, among them some competing for U18 national
honours as well. The race up front provided an exciting battle between Nick Griggs U18 (Mid-Ulster)
and Dean Casey (Ennis Track), with Griggs, the Tyrone teen running sensation, prevailing in the final
stretch. The star man for Clonliffe was Sean Kay, fresh on Irish soil to make his club debut, around his
studies in the famous Ivy League institution of Yale, Connecticut. It was a strong debut on what for
him was an unfamiliar course, finishing just outside the medals in 4th place. Sean led home a Clonliffe
‘A’ team of Niall Carbery (38th), Ronan Donohue U18 (54th), Sean Boyne U18 (75th), Cian Murray (78th),
Darren O’Dwyer (79th), and Sam Murray U18 (81st). The top 4 combined to secure Club Team Silver,
an excellent return for a hard day’s work. Niall Carbery (Junior) and Sam Murray (U18) each also
earned themselves a County team gold medal (Dublin). The ‘B’ team performed commendably,
most of whom have a number of years ahead competing in the junior ranks, with the roll call: Cillian
Keegan U18 (136th), Cian Whelan (142nd), Andrew Gaffney U18 (151st), Jonathan Fitzsimons (155th),
Eoin Byrne (161st) and Jack Woods U18 (174th). In the U/18 category the lads took bronze.

And so, onto the final two races of the day, the Senior – incorporating U23 – national Championships,
and they did not disappoint, with several Olympians and former national Champions dotted across
both fields. So great to see such a huge turnout with athletes travelling from the four corners of the
island, not to mention a few coming from further afield, across the Irish Sea and Atlantic Ocean.
First up was the Senior Women, where the main story of the race was the fearless, aggressive front
running by Michelle Finn which ultimately secured her a fine win over the 8000m course, with the
sub-plot involving a half dozen athletes chasing hard with Sarah Healy grabbing Silver (and U23 Gold)
and Rosin Flanagan just edging bronze at the last from Aoibhe Richardson. The Clonliffe women
performed admirably for 8th Club Team, packing quite closely and led home by the experienced Ailish
Malone demonstrating her endurance strength for 74th place, followed by Kate Hawkshaw (76th),
Laura Tuite (79th), Meghan O’Keefe (91st), new women’s club captain Jenny Johnston (94th), Sarah
Hawkshaw (96th), Alannah Cooley (97th) and Clodagh Galvin (104th).

The Men’s Senior race over 10000m took in 6 full laps of the testing course, although the ground
held up remarkably well, with just a few sticky patches. In the first two laps, the Clonliffe ‘A’ team
were present among the leading players, with Sergiu Ciobanu coming off his recent Dublin Cross Country win prepared to mix it with the pre-race favourites. As the race approached the half-way
mark, the pace picked up, our leading men were gapped and the field strung out quite rapidly. DSD
AC maintained a strong presence up front at all times, and it was clear as the race reached its final
two laps that the Club Team Gold would be heading to Dundrum. Led by race winner Hiko Tonosa,
they secured first, third and fourth places, separated by Darragh McElhinney U23 (UCD AC) in
second. The Clonliffe A team did not wilt however, in what was a stellar field and took a clear Club
Team Silver through the four scorers Sean O’Leary U23 (16th), Sergiu Ciobanu (17th), Ian Guiden (20th)
and Johnny Whan (38th). Sean and Sergiu formed part of the Dublin team that took County Gold.
Sean finished 7th place in the U23 category to put himself in the conversation for Euro Cross
selection. In close order were young Ben Guiden U23 (45th) and not quite as young Mark Kenneally
(50th) returning to the site of his hugely memorable 8th place performance at Euro Cross 2009. It was
great to see Tudor Mircea, back in the Clonliffe colours after some years hiatus, coming home
strongly in 65th. Rounding out the A team, it was a hard day for David Fitzmaurice who had started
strongly but faded in the final laps to 117th, with it being a long time since he laced up spikes for a
muddy XC race on these shores since moving to the US, where he is making great breakthroughs on
the road race circuit. The Clonliffe B team gave their all, with those pushing hard early on maybe
paying for their effort over the 6 gruelling laps. They can all be proud, with the roll of honour as
follows: Stephen Cashin U23 (80th), Liam Roarty (90th), Eoin Taggart (93rd), Thomas Sherlock (106th),
Sean Doran (109th), Brian McMahon (116th) and Mark McDonald (124th).

Last but most certainly not least, a huge thank you to all the Clonliffe officials, coaches and members
who gave up their time over the two days to set up and dismantle the course, provide marshalling
on the day, and manage the tricky pinch and change points that all ensured a successful National
championships that will surely live long in the memory. Even the weather co-operated on this
occasion. The Euro Cross in Abbotstown is only three weeks away, looking forward to some
captivating races and seeing you there!