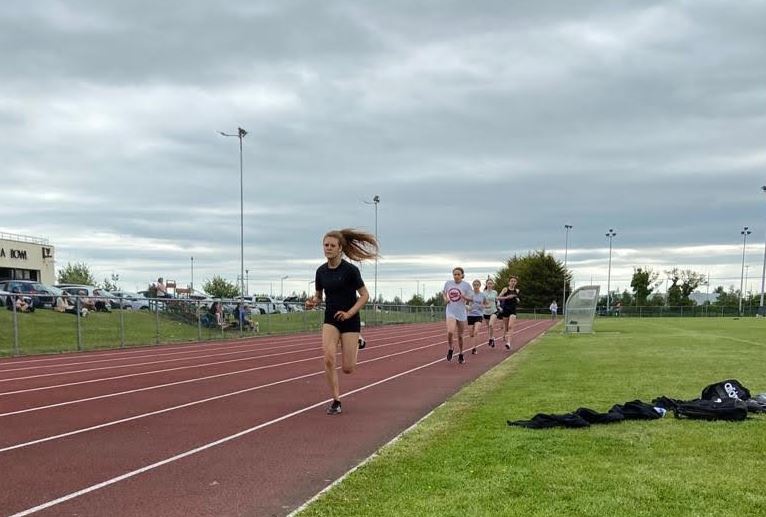 Eugenia Bateson Reports from ALSAA: The weather while breezy gave another fantastic day to our young and promising athletes with a fine show of mostly middle distance events.
The U14 and U15 Boys and Girls started the day with their 200m Sprint to give them time to recover for their 1500m at the end of the day.
U14 and 15 Girls started the events with Ava Usanova showing fine style yet again taking the gold in preparation for her National Championships.  Ciara Scott finished a very strong 2nd place .  The U14 Girls was won by Rebecca Finn followed by Niamh Cooper in 2nd and Iseult Doggett Finnie in 3rd.  Well done ladies, an excellent start to the proceedings for the day.
The U15 Boys were up next with the power house that is Jaydon Carroll taking the lead from early on with a strong and convincing win.  Jake Kane, took a cool 2nd followed by Sean McHugh for the bronze.
Next up were our younger athletes starting with the U9’s.  Many of these promising young athletes, having only been in the club for a matter of weeks took on their middle distance event of 300m.  This young group showed tremendous guts and determination taking on this distance with all athletes battling through to finish their races.  Coaches were very impressed with the U9’s (300m), U10’s and U11’s (500m) bravely pushing through the strong breeze taking on their middle distances for the first time.  They will agree, this is not for the faint hearted but they all came through with some very brave performances.Results: U9 boys 300m

The U13 Boys and Girls were up next with their middle-distance event of 600m.  Some very impressive performances from both boys and girls.
U13 Boys 600m

The U14 and U15’s were up next.  This particular group of athletes deserve particular mention for the way they have trained throughout the pandemic.  The not only have trained in the pods when allowed but continued to train by themselves when club activities were closed due to restrictions.  They worked closely with Ann and Graham and took part in many virtual challenges both through their coaches and with Athletics Ireland.
The U14 and U15 Girls were up first for their 1500m event.  U14 Harriet Kenny ran with the U15 Girls and gave a strong performance and held her own.  She showed her usual focus and determination from start to finish and worked well with the U15 Girls.  The U15 Girls were a force to be reckoned with.  Their consistant training has built these young girls in to a fine group of athletes.  Irish Athletics is showing some very impressive performance from females at the higher levels and our U15’s are showing great promise for the future of female athletics in Clonliffe Harriers.  From early on Cadhla Nigfhloinn, Rebecca Walsh and Sarah McDonnell packed tight and ran close throughout.  Harriet held onto the back of this leading pack in the early laps of the race.  The 3 U15 girls eventually managed to break from Harriet but it was difficult to tell what the medal positions would be.  At the bell, Rebecca took a slight lead, but Cadhla and Sarah were not going to let her break easy.  With 300 to go Rebecca gave another push and managed to take the lead from Cadhla who gave good chase.  With 200 to go Sarah was pushing hard to close the gap but Rebecca and Cadhla were still fighting for the gold.  On the final bend, Rebecca opened her stride and with great class and maturity, her hard work in training and on the day paying off, ran a very impressive final 100m to take the gold with Cadhla taking a well deserved 2nd and Sarah finishing in a brilliant 3rd.  This group is definitely one to watch.  Harriet Kenny is the U14 Girls 1500m Club Champion.
U15 Girls 1500m

U15 Boys 1500m – Unfortunately the majority of this group on the day decided they were sprinters ????? – Lads Seriously ???Rory Quill, Jake Kane and Noah Rossi however remembered their roots as middle distance, promising cross country runners and weren’t going to put their training to waste.  Rory took an early lead and looked comfortable all the way around.  Jake Kane, the only athlete to take part in all events in his age group ran his usual, cool and steady race throughout, never allowing Rory to get too far ahead of him.  Noah unfortunately had to pull out during the race with some calf trouble but always the true sportsman, supported the lads to the end.  Rory and Jake ran a steady race throughout with Rory taking the gold and a well-deserved silver for Jake.U15 Boys 1500m

Well done to the athletes and coaches, a fantastic day was held by all.  Thanks to those who officiated at these championships and in particular to the parents who have been so understanding in our change of venue.