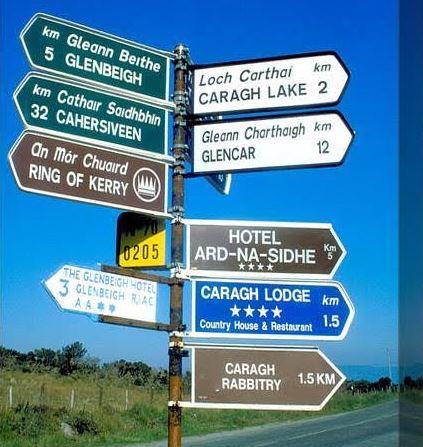 Lost in the Kingdom. “Can you tell me how to get to Tralee?”

While there are a handful races that I tend to come back to every year or so, I am more likely to seek out something new, to stay motivated and experience new places and faces. I have combined mini-tourist trips with races in the four corners of the island from Derry to Cork to Connemara to Wexford as well as a few overseas. So many events but not enough time!

A few years ago, my wanderlust brought me to the “Kingdom”. More precisely, to Tralee for the annual 10-mile race, part of a race series in the lead-up to the Tralee marathon (which fellow Harrier Gary O’Hanlon has won on at least one occasion). Though I had visited Killarney, Kenmare and toured around the Beara and Dingle peninsulas in years past, I had never been to the county capital, so I packed the running gear in the overnight bag and headed south.

The race takes place in winter, around February time, so the town was relatively quiet. I’m sure that it transforms in the  busy summer months as it serves as an ideal base to explore the beautiful, scenic surroundings of the Brandon Mountains, small villages along the Dingle peninsula, many unspoilt beaches and the more recent growing attraction of ‘Star Wars’ set locations.  The race start was situated a few kilometres out of town in the Tralee Bay Wetlands, a Nature & Activity resort, with an undulating route along small country roads, rising in elevation until halfway, thereafter winding its way to the finish in Tralee town centre. Conditions were mercifully dry, although there was a strong south-westerly wind that would make the second half of the race all the more difficult. At the starting gun, there were about a dozen athletes to the fore, a mix of club runner types and GAA strongmen (you can always tell by the build… and the shorts!). By the 5km mark, the GAA stars had dropped back, leaving four club runners, one of which set a strong pace up front, opening a gap on a chasing trio including yours truly. Over the next few KM’s, the road climbed gradually upwards and I found myself moving away from the others and closing the gap on the lone leader. By the 10km mark and over the peak, I had caught and passed him.

The reality is that I am rarely in the position of leading a race and can usually focus by concentrating on the backs of those ahead of me and not be worried about course markings. On this occasion, I reached a fork in the road, with no marshal or sign to direct me. My instinct told me to take the larger road but shortly afterwards I heard the runner behind me shouting and turned to see him waving. I slowed a bit, then heard him say that he reckoned the smaller road was the correct one as it led back to Tralee. I asked if he was sure – he wasn’t – but decided to go with the ‘local knowledge’ and we both turned back to retrace our steps to the junction. Before we got there however, we met the third-placed runner coming towards us at speed, who told us with full confidence that we HAD been on the correct road! Oh dear… turn around, again!  The last 5km resulted in a battle against the headwind and my inner voice telling me what an eejit I had been. Needless to say, my momentum was stymied and motivation took a dip.  I eventually ground out a third-placed finish, grasped from the jaws of victory. At the friendly after-race tea & sandwiches and prize-giving at Race HQ, some sympathy was proffered, no doubt mixed with a touch of schadenfreude by the story of this Jackeen losing his way in the Kingdom! I managed to see the funny side and otherwise enjoyed my trip. What I took away from it is to always study the course map in advance and commit key landmarks to memory. “Fail to prepare. Prepare to fail!”

A couple of years later when I found myself at the front of a race again, I was not going to make the same mistake. This time going clear of the chasing pack and ultimately breaking the tape for the win. Indeed, no marshals or signs were required along the route on this occasion. Even I could find my way at the Dublin Port Tunnel 10K (-: