After the outstanding performances of the clubs track and field athletes at last weekend’s Glohealth National Indoor Championships yesterday was the turn of the club’s cross country athletes to shine and shine brightly indeed they did. After a magnificent effort by the three Clonliffe teams competing the Men’s senior team were back on top regaining the national men’s senior title with a comprehensive win as a result of the four scorers all finishing in the top ten, an historic 1st Junior Women’s individual cross country title for Hope Saunders as she led the Junior women’s team to silver and the Junior men gathered in a set of team bronze.

Yesterdays championships were held in the picturesque surroundings of Kilbroney Park, Co. Down. It was a tough course with several sharp hills and a very long uphill drag into a strong cold breeze. Underfoot conditions, however, were superb. Once again, however, it must be said that the attendance at the Championships both by way of competitors and spectators was frankly pitiful. 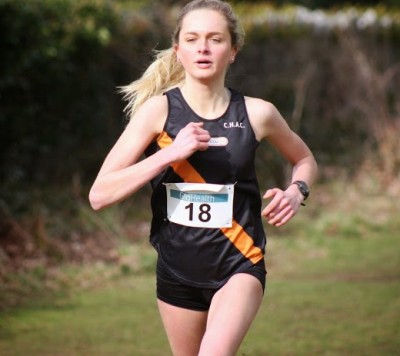 The first Cloniffe athletes into the fray were the Junior women who competed over 4000 metres, two long laps of the course where Hope Saunders lived up to her billing as the best distance junior female athlete in the country. Hope went to the front and on the second of the 2K loops made her break on the uphill section driving ahead to take a fine win in a time of 14.46 seconds, some 5 seconds clear of Annalee’s Clodagh O’Reilly. With fine runs from the other Clonliffe girls, Laura Tuite in 8th place, newcomer Lizzie Murray making a wonderful championship debut for Clonliffe in 11th and Alannah Cooley in 12th these four took silver of 32 points behind DSD. These four were very well backed up by young Sophie Higgins who finished in 15th place. 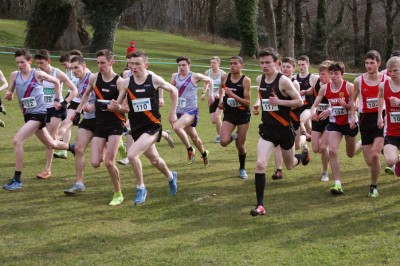 The junior men’s team were facing a stern task with several teams expected to battle it out for the team title. Pre race favourite Kevin Mulcaire (Ennis TC) took the win, Clonliffe’s Cathal Doyle was the first scorer in 4th place, Adam O’Brien was next in 9th with Brian Flanagan 4 seconds behind him in 10th. Sean Carrig running one of his best races in some time was a 4th scorer in 13th place. The team total of 36 points put the Clonliffe lads in 3rd place. Of the other Clonliffe juniors Niall Norman placed 21st, Alex Gibbons 22nd, Joseph Hession 23rd and Kevin McKenna 24th.

Unfortunately there was no Clonliffe athletes in the Senior Women’s race. 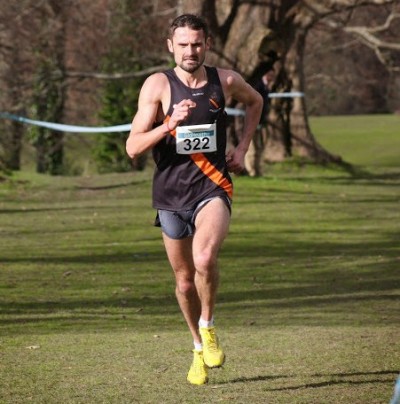 The Senior Men were last into the fray. Despite the late withdrawal of London Olympian Mark Kenneally through illness, the team was galvanised by a stirring speech from club captain Joe Cooper and the black and amber athletes responded to a man. From the gun Sergiu Ciobanu, the 2013 National Cross Country champion and 2014 National marathon champion was in the lead three, in fact Sergiu took on the pace at the early stages. The rest of the Clonliffe team with Joe Cooper’s words still ringing in their ears packed superbly with Ian Guiden, running his first race for six months, leading a pack which contained Jayme Rossiter, Tudor Mircea, Dave Flynn and James Kevans, all six Clonliffe men at this stage being in the top ten. A lap or so later, however, Ian Guiden fell off the pack, his lack of racing fitness meaning that he endured a torrid afternoon, however, both Jayme Rossiter and Tudor Mircea responded with Jayme now back in his pre injury form and running the best race of his Clonliffe career. He led the chasing Clonliffe trio positioned from 7th to 10th as James Kevans also began to slip back.

Up at the front of the race, pre race favourite Mick Clohisey (Raheny) had opened an unassailable lead to retain his national individual title. Sergiu, however, had a big gap on the chasing pack and was looking comfortable in 2nd, despite a blistering final lap by DSD’s Brendan O’Neill closing the gap considerably, Sergiu held on to finish in silver position. Jayme Rossiter continued to make progress and worked his way up into 6th place over the final lap chased all the way by Tudor Mircea in 9th and Dave Flynn in 10th. Clonliffe’s 4th scorer, Flynner, was home before the second Raheny scorer had finished giving the Clonliffe men a comprehensive win on 27 points some 19 ahead of Raheny in 2nd and, making a welcome return to national team medals, Donore Harriers in 3rd. 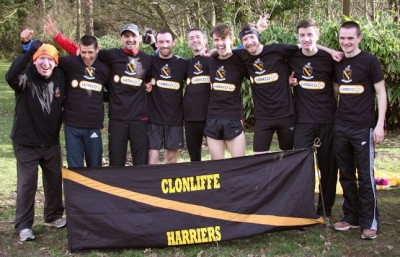 Thus ended what has been a sublime fortnight for Clonliffe.