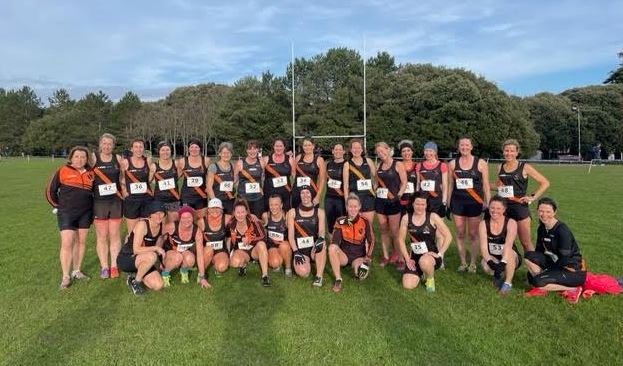 Laura Tuite Reports: St.Anne’s Park, Raheny was bustling with eager athletes all participating in the Dublin Master cross country championships. It was a cold crisp day with a slight headwind, underfoot in the open fields was pretty soft after recent rain this week, but the trails through the trees were dry but technically challenging, making it an interesting 1500 loop.

We had three teams of Clonliffe ladies competing in the masters women 3000m which contained over 200 athletes ranging from over 35’s to over 70’s. Captain Jenny Johnston lead the Clonliffe ladies home with a great finish in 13th place followed closely by Ailish Malone in 14th and Ciara Peelo in 15th. A great sprint down the home straight by Siobhan Devaney finishing in 19th place secured the ladies Silver W35 team medal. W50 silver was also secured as a result of great performances from Aimee Ahern, Edel Maguire, Aine McCann and Anne Lyons.

Overall Clonliffe ladies had a great day out with everyone looking forward to upcoming season of racing.

The Clonliffe master men were also out in force, once again a very big field in the men’s race which took place straight after the women’s race, the ground now nicely churned up. Tudor Moldovan led the Clonliffe men home in second place behind Raheny’s Mick Clohisey. The M35 team unfortunately finished just outside of the medals placing fourth with a team of Tudor, Tom Sherlock, Niall Sherlock and Ger Clerkin. The M50 team placed seventh overall with Philip O’Doherty picking up individual silver in the M60 category whilst team bronze was picked up by the M65 trio of Declan Murray, George Maybury and Pat Devitt.

In the battle for best overall club for the Pat Hooper cup Raheny took the honours with a total of 48 points with Clonliffe breathing down their necks on 43 points and Sportsworld 3rd on 39.