Clonliffe U/17 athlete and Ace Reporter Kevin Loftus has filed the following report:

There is most certainly no rest for the wicked, especially when travelling by ferry abroad; as some of our young, brave harriers experienced this chilly Saturday morning.  In the very early hours the aspiring athletes chosen from across three training groups (age groups from U/10 ranging to up to and including U/17) gathered at the club house side of the Morton Stadium before departing via bus through the port tunnel.  Despite the few dismayed stragglers there was the relative ease of travelling in a relaxed style and comfort on the “big boat”.

With an abundance of activities to choose from there was little idle time spent lounging about; between thieving game machines in the arcade and the duty free shopping areas.  Finally, land was spotted and it wasn’t long before we were back on the bus roaming through the Welsh countryside and on down into England.  After more than one pit stop for a restroom break we eventually reached the Cotton Hotel and Spa.

With the finer details of room locations, meeting points and keys we set off on an easy run into the local village.  This was swiftly followed by a “very intense” stretching session to ease out the muscles before the big day, done in none other than the hotel’s pool.  After some down time it was the time for dinner, and a great array of choice for both adults and children proved for quite a feast.  With food in the engines, and having wished Kristin McGrady Hogan a very happy birthday, all of us returned to the roost for a good night’s sleep ahead of the action packed, sure-to-be-tiring day that lay ahead of us the following morning.

With a very enjoyable, relaxing first day behind us race day was upon us at last.  A concerted effort was made by every single Harrier to be prepared and packed with a full English breakfast (or what some would describe as “a sloppy Irish”) in their fuel tank, we boarded the bus and departed at 9:30 am sharp.  The day of racing was divided between two race meets hosted by Liverpool Harriers in Wavertree, Liverpool.  The former being the Ernie Gallagher Memorial Medal meet and the latter the Tom O’Mahoney Open meet.

In the morning, as proceedings began there was a growing wind hammering down on the brave souls participating in outdoor events.  Unfortunately, this battering was following by a prolonged shower of rain that was chilling to the bone; only interrupted briefly by an odd spell of sunshine. Despite this however, as per usual, the effort, determination and skill of our athletes, performing to the very highest of standards, was witnessed in its very roots.  From across all age groups each and every athlete gave it his or her all; which, at the end of the day is all any coach could ever ask for.

Indeed it is a brilliant achievement to reach and attain a podium position at any track and field meet like this; and to the many who did so a massive congratulations to you. Yet in saying this, this trip is as much about the winning as it is the taking part.  The spirit of those who truly fought all the way to the line, not giving up and battling on is what being a club member is all about.  Our motto, “Nil Desperandum”, encourages us, no matter the size, shape or form of other competitors, to go out and simply give it our all.  This, we can safely say, is what every harrier accomplished on the day.

Summarising the achievements of the day is by no means an easy feat.  In total, Clonliffe bagged 10 Gold, 13 Silver and 4 Bronze medals by the finish of the day’s racing.  This is, in its simplest, fantastic.  A terrific well done to all who brought home the medal metal, and to those who were out of the top three placing, an equal amount of praise goes to you for participating.  To give an in-depth analysis of each race would bore anyone into insanity, so one must keep things relatively brief.  In highlights: Michael Coleman delivered three astonishing top notch performances finishing 1st in the 100m, 800m and long jump U/13 for the hat-trick.  Sally Sumola was the undisputed winner of the U/ 13 girls 150m sprint, Sally also taking a great silver in the 75m.  In a mixed age group 200m race Rebecca Fitzsimons came and conquered in fine style; taking a truly deserved 1st.  Stephen Cashin tore down the home straight for 1st in the U/16 800m; likewise Craig Giles ran away as a clear winner, triumphant in the second U/16 800m race.  Doubling up in 1st, Craig demolished the U/16 1500m field thirty minutes later.  In the second 1500m for U/ 16, the pairing of Mark Kavanagh and Matthew Keirns ran very well coming home in 1st and 2nd place respectively.  Katie Connolly had a particularly fine 1st place finish in the U/16 shot, which concluded the first meet of the day.

Kristin McGrady Hogan took a well deserved bronze in the75m U/14 girls; Blaize Carroll adding to the collection took bronze also in the fifth 75m U/14 race, Jack Horan an outstanding 3rd in the 800m U/16 boys  and finally Liah Brennan was a super 3rd in the 300m U/15 girls.

On then to the afternoon; where weather conditions hampered the times, but not the spirits.  The only competitors in this set of races were the U/17 boys.  In the 800m, Matthew “jenko” Jenkinson had an outstanding finish to win outright, with Fionntan McManus a very good 2nd.  In the mile event, Alex Hogan ripped shreds from the track to take 1st, with Matthew again a great 2nd and Sean “GAA” O’Leary a strong 3rd.  To put a wrap on a brilliant day’s racing Alex was 2nd in the 3000m with Sean again a good 3rd.  A special mention to Harry “the crusader” Pierce who gave anything and everything a go, determined to find something that he take a medal home in; unfortunately his efforts, on this occasion, being futile – keep trying Harry. 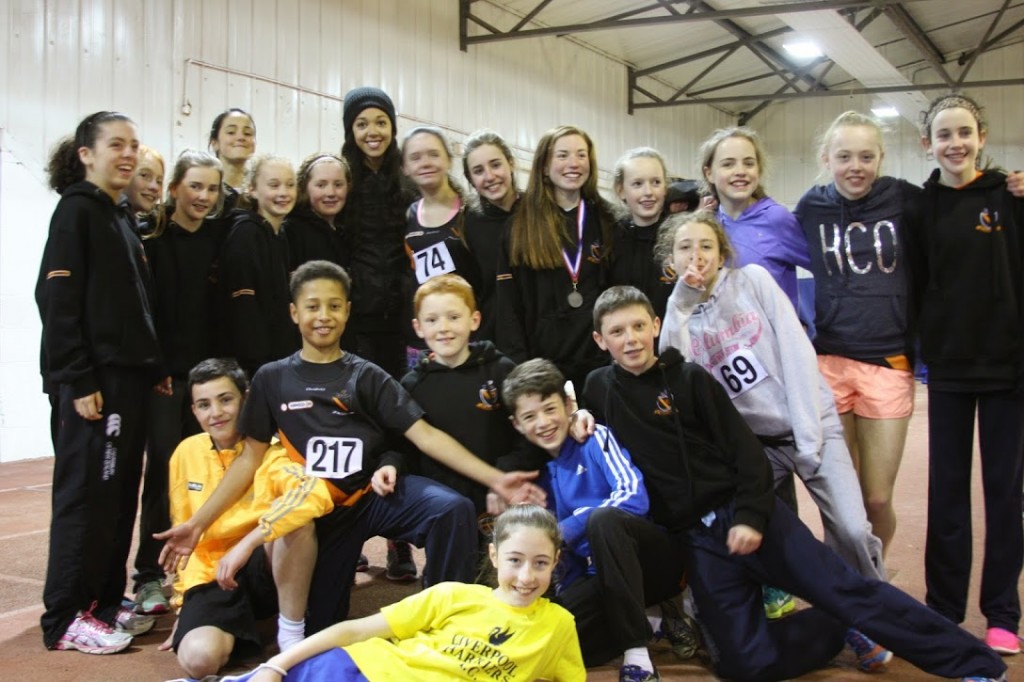 Another highlight for many was the chance meeting with local athlete Katarina Johnson-Thompson the European Pentathlon Gold Medalist who was more than happy to pose for photos with our athletes and was very friendly to us all.

So, a superb outing for the club’s younger athletes, proving there are still many golden years of athletics ahead of us in the years to come.  Hoping that everybody enjoyed this very well organised excursion, we must take this opportunity to say well done to all, but also a huge thank you to the coaches, as well as the great help of the parents who accompanied us on this trip.  It simply wouldn’t be possible to make this trip without the commitment and dedication that you put into orchestrating a trip this size; your work is so very much appreciated.   Thank you.  Nil Desperandum.