The curtain has most definitely been called on this fourth and final day of the fierce competition in the Dublin Juvenile Track and Field Championships for 2015.  There was, obviously, no better way to end what has been a truly tremendous four days of racing than  with the relay (4 x 100m) and 1500m distances.  The talent, charisma and expertise of our young athletes that never ceases to amaze spectators was evident in abundance yet again, with each and every harrier pouring his or her heart and soul into tearing up the surface beneath them, metre by metre in most cases.

Settled, humid conditions gave rise to the perfect setting in Tallaght Athletics Stadium for a most exciting and thrilling night’s racing.  The track was illuminated for the most part by the dying rays of a blood red, picturesque sunset; with the odd drifts of sparse cloud concealing heat and maintaining an ideal temperature.
Progressing through the heats and into the final, the Under 13 Girls relay team of Emma McDonnell, Kristen McGrady-Hogan, Blaize Carroll and Holly Roache delivered a whopping 1st place photo finish in a thrilling 4 x 100m race.  The girls now take the invaluable experience from this race in their campaign for Nationals in just under a month’s time. 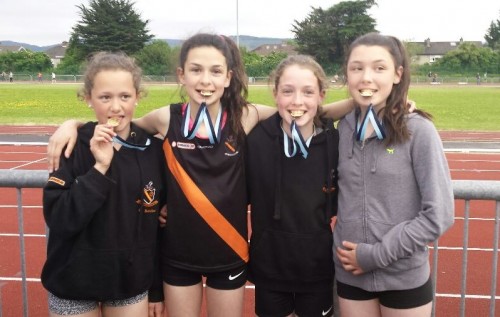 (u/13 Girls 4 x 100 Dublin Relay Champions)
Remaining quietly confident about their prospects of taking home county medals were the Under 15 Girls relay team, made up of learned sprint and distance runners.  The team composed of Katie Connolly, Rebecca Fitzsimons, Tess Loftus and Caitlyn Butler.  Needless to the say the girls failed to under perform, pulling spectacular 3rd place finish out of the hat, and what’s more – this position giving them the wonderful opportunity to toe the line in Tullamore. 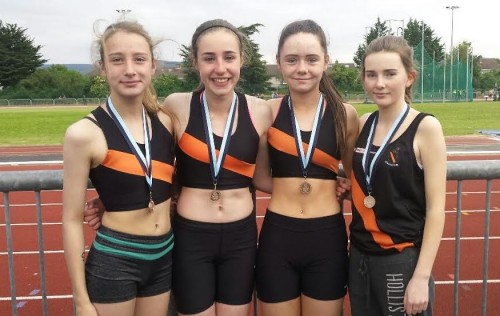 (U/15 Girls Dublin 4 x 100 Relay Bronze)
In the first of the 1500m races, Darragh Carter worked his way through the spaced field of competitors in the Under 14 Boys race to take a well deserved 3rd place for his great effort.  Ella Browne likewise had a very strategically run race with her work cut out, however persevering on this occasion to claim another Dublin Under 14 Girls bronze.
Cian Bolger put in another superb performance in the Under 15 Boys 1500m, clocking 4:32.3 (a near personal best), arriving home in a fantastic 3rd, having took up the reins of the leading pack early on.  Craig Giles is another harrier who neglected under performing with perfection having an extremely well run race to finish just shy of gold in a stupendous 2nd.
Our next athletes off the mark was Alannah Cooley, who, after a much needed respite on foreign soil overseas, showed no signs of poor form as she claimed a miraculous Dublin Championship title; following on from her 2nd place finish in the 800m; both of these distances being in the Under 17 Girls categories.
In what was a fierce and heated mixed race of the Under 17, 18 and 19 Boys, Adam O’Brien emerged yet again victorious, leading the remains home, as Dublin Under 18 Boys 1500m Champion, adding this title to that of the 3000m last Sunday; massacring the field in such a fashion.  There was a great gold to be had too for Josh Stubbs who arrived home soon after to record a fine win indeed in the Under 19 Boys category.  Finally, the Under 17 Boys had a marvellous 1,2,3 placings of 1st, 2nd and 3rd from the trio of Joseph Hession, Alex Hogan and Sean O’Leary respectively.  These three remained close together for the duration of the race and with 300m or so to go Joseph struck to storm away home, Alex chasing close behind and Sean trailing not far off. 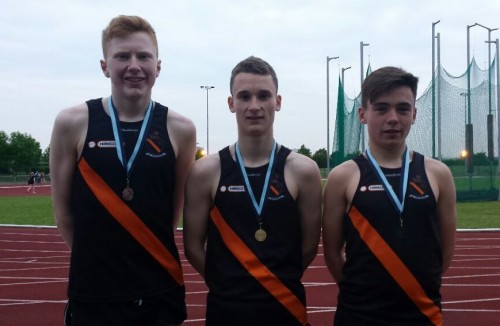 (U/17 Dublin 1500  3rd S. O`Leary, 1st J. Hession, 2nd A. Hogan)
This brief summary does little justice to the masses of athletes from all age groups who committed themselves to their race and their training with such determination, and therefore it is only right to congratulate each and every single harrier on their performance in these championships.  To our esteemed, learned and extremely patients coaches, we extend our gratitude; and to the officials and organisers of such a large event like this we commend and thank you, for it simply would not have take place without your cooperation.  All roads now lead to Tullamore Harriers Stadium in Athlone in just over a month’s time for the National Juvenile Track and  Field Championships 2015.  We wish all of our athletes the very best of luck.  Nil Desperandum.
Report: Kevin Loftus