Today saw the track surface of Morton Stadium lit up not only by the immaculate sunshine of recent days but also by the tremendous talent exhibited by our very own club juveniles who were in fine form at today’s first day of competition in the Dublin Juvenile Track and Field Championships.  Underneath a sky of burning blue and surrounded by grasses gleaming green, athletes both newly acquainted and well seasoned exceeded expectations immeasurably.  Given the persistence of an unfamiliar yet most welcome exotic climate that has graced our emerald isle over the past few days, conditions were simply superb for an exciting evening of racing.  Comfortable temperatures afforded runners and spectators alike the opportunity to take off any unnecessary layers and to bask in the warm of a summer twilight.

As the sun simmered down closer towards the horizon, the middle distance events got underway with an inviting welcome from the very experienced Master of Ceremonies, Cecil Johnston.  Tonight’s programme featured 500 to 800m races for both boys and girls in the Under 10 to Under 19 age groups, excluding the Under 14 / 15 / 16 age groups which have been rescheduled for this coming Sunday.  Perseverance and ambition was displayed in abundance by all of our athletes today, with many stand out performances.

First to toe the line for her Under 10 500m race was Sarah McDonnell who placed  a fantastic 4th overall after a timed heat.  Sarah worked diligently throughout the race, producing a particularly strong finish at the end.  Jonathan Fitzsimons moved tentatively to fore at the beginning of a fraught Under 12 600m race before driving forcefully home in a brilliant 3rd to a rapturous applause from onlookers.

These outstanding feats where matched by magnificent 3rd and 4th place finishes for Naoise Cullen and Sally Somola respectively in both heats of the Under 13 600m race.  Both girls displayed the courage of conviction that is testament to their many months of preparation for these championships. 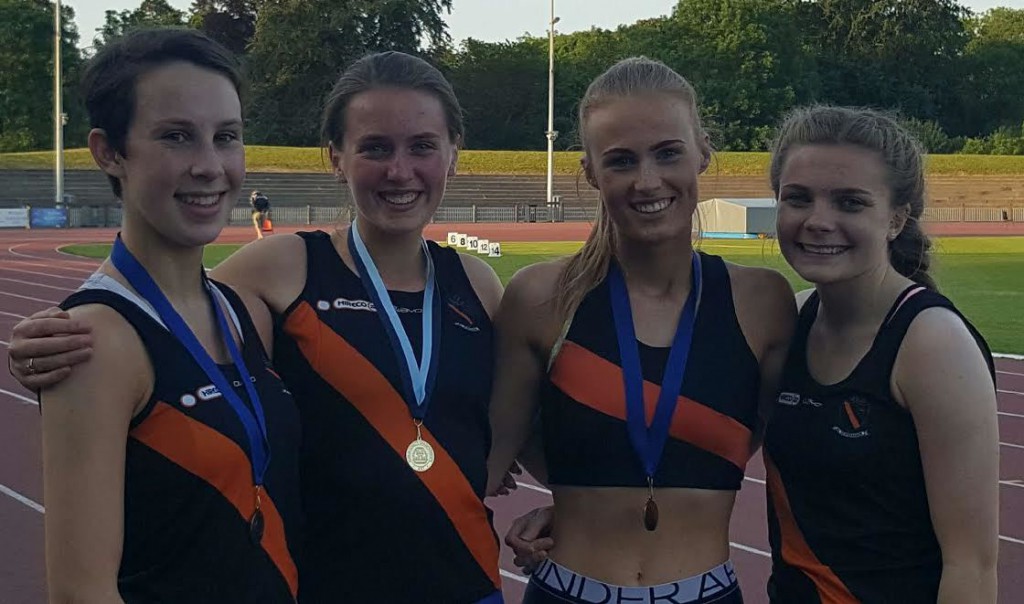 Following a slight interlude, the programme was reorganised to facilitate older age groups.  Hannah Browne stood proudly in the limelight this evening as she took a terrific gold in the Under 17 800m race.  Hannah guided her training partners Cliona Cooley and Kate Howlett home in exemplary form, Cliona and Kate arriving home with impressive 3rd and 4th place finishes respectively.  The trio have proved once again that consistently is key to continued success.

Minutes later and Sophie Higgins was unleashing a great sprint off the final bend in the U/18 race to move from 5th to bronze. In a sparsely populated yet equally thrilling Under 19 800m race, Alannah Cooley lead an eager Amy Fay home in an excellent 2nd with Amy placing a great 3rd.  This result bodes well for Amy who has recently joined the ranks.

Jack Horan had a super run in the boys U/17 race battling all the way to the line to take 2nd place and a whisker away from gold, still a new pb of 2.06 was just reward. Finally, Joseph Hession produced a stellar run to claim championship gold in the Under 18 800m race, and in another sub 2,  to conclude an exceptional evening of sport.  Joseph captured the attention of an animated audience by propelling himself into the mix from the off.  He tore his way down the back straight of the track to emerge victorious with a well deserved 1st place podium finish.  Meanwhile, Greg Hossenny clung tightly on to Joseph’s heel to achieve a magnificent 2nd in what was an aggressively competitive race.

It is remarkable to note the calibre of athletics seen here today at a grassroots level.  The commitment and devotion of these young athletes to their sport was clearly evident by the many marvellous performances witnessed by very proud parents and coaches.  Equally impressive is the obvious dedication of coaches to the improvement of their athletes’ boundless capabilities.

So we move onwards to Sunday’s championships that are due to take place in Taillight Stadium, with respite tomorrow given the All Ireland Schools Track and Field Championships in Tullamore. Nil Desperandum.