Kevin Loftus Reports: Although the recent abnormally harsh and unforgiving weather has hampered almost all juvenile fixtures both on a local and national level this weekend; the exception was the National Juvenile Uneven Age XC Championships which took place in a mud trodden St Augustine’s College, Dungarvan, Waterford today.  The horrendous, torrential downpours over the past week completely devastated the already spongy ground underfoot resulting in the hazardous potential for ankle injuries.  There was, despite these remarkably adverse conditions of the course, a subtle sigh of relief as Harriers, coaches and supporters alike thoroughly enjoyed the absence of teaming rains and  howling winds.  These brute elements were replaced with fresh, arid air and light rolling clouds portraying the truly picturesque scenery of the county beautifully. This young, budding journalist is delighted to report that each and every Harrier that gave tirelessly and selflessly of themselves today committed in full to achieving the very best, representing their family their coaches and their club in such fine style.  Running their hearts out, our athletes of ages 12, 14, 15 and 16 collectively delivered superb performances and have once again done their families, coaches and club enormously proud.  Without favouring any team more so than others, here is a brief analysis of the outstanding XC running witnessed by the loyal supporters.

First out of the starting pens were the very eager Under 13 Girls team; consisting of Emma McDonnell, Kristin McGrady-Hogan, Aoife Hession, Holly Roche, Alannah Fitzsimons and Ella Cooley.  Bearing in mind that this was the girls’ very first National XC Championship the wonderful determination never waned from their side as they all finished strongly.  They take valuable experience from a particularly gruelling day of competition with them in future.  Many of these girls deserve just praise for their unyielding commitment to their training, demonstrating that training hard really does pay off.  A most jubilant well done to all of you!
With conditions on the ground deteriorating rapidly, the Under 15 Boys were next into the fray, with the notion of disappointing far from their minds.  With literally astonishing runs from all of the team, Ben Guiden and Cian Bolger led their club mates home to the emphatic roar of the crowd with terrific running from both Harriers; finishing 9th and 11th respectively.  This duo was strongly supported by great runs from Aaron Cullen 47th and Ian McElweeney 76th who delivered fantastic performances, backing up their teammates very well.  An brave and courageous run must be said of young Darragh Carter’s performance in 98th, rising to the challenge of stepping up an age group in stupendous form, running with complete conviction right the way through.  The team were awarded not just with praise from their coaches but with silver inter club medals, while both Ben and Cian took inter county gold on the Dublin team. 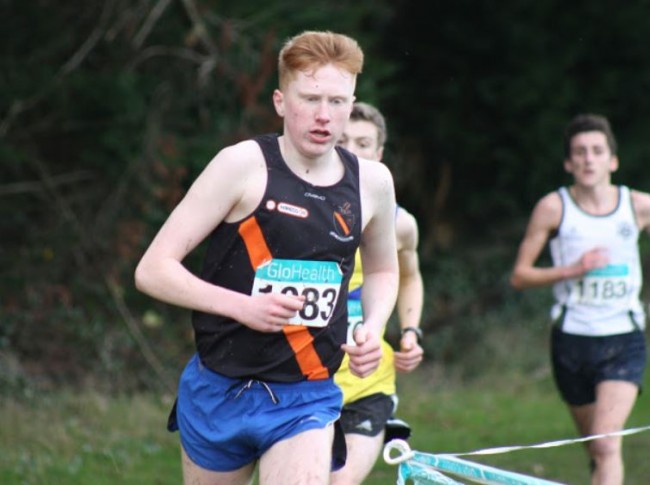 Sean O`Leary Boys U/17 XC 3rd place
Finally, the Under 17 Boys took to the start line in what was one of the most exciting and energetic  races of the day.  Sean “big mouth” O’Leary shocked everybody who knew him, most of all himself, running an absolute blinder indeed to record a 3rd place individual finish.  Sean demonstrating the spirit of our club with his own abbreviation of the timeless motto “Nil D”.  Not withstanding this, Alex Hogan; recovering from hamstring inflammation recorded an outstanding 23rd place finish, shortly followed by Kevin Loftus improving on performances in previous years finishing in a good 33rd position.  These three were furthermore supported by great running from Joseph Hession 43rd (3 being a popular digit with the U/17s) , Craig Giles 48th and Fintan McManus 100th all of whom put in a hard slog to record a brilliant 2nd place team finish. Into the bargain inter county golds for Dublin were taken back to Santry by Sean, Alex and Kevin. 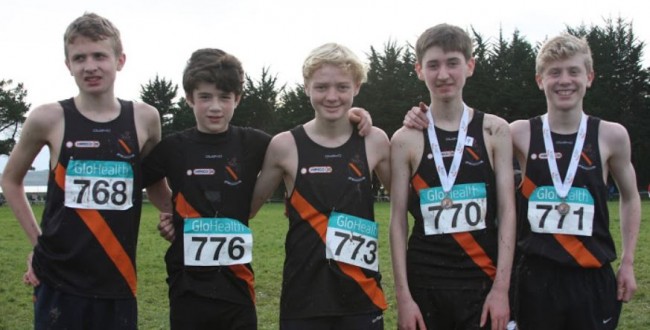 U/15 Boys National XC Runner up 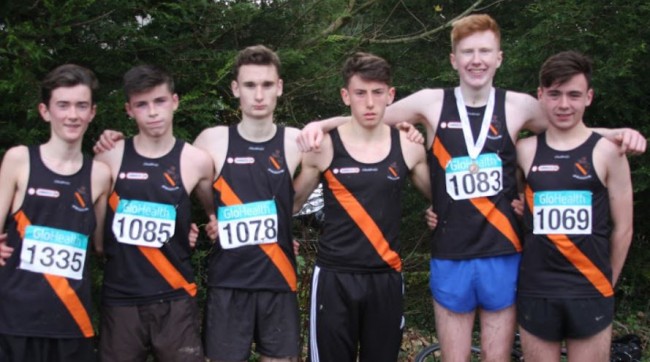 U/17 Boys National XC Runner up
So, yet another National XC Championship has come and gone; our juveniles proving perseverance is the only key to success.  A massive thank you must be said of all the coaches who are equally if not more committed to providing quality assured guidance to our young athletes.  To all of our supporters who also give of their time so willingly, you are genuinely appreciated.  From here, athletes look towards the Schools XC Championships due to begin shortly after  Christmas, however not before we see some of our high performance athletes competing in the European XC Championships hosted in France next weekend.  As always, Nil Desperandum.
Report written by Kevin Loftus.
With the juvenile programme concluded the Novice championships kicked off with the sole Harrier in the women`s race Emer Treacy putting in a battling performance in the by now thick and energy sapping mud. Next up the Clonliffe Novice men and an outstanding run, his best to date in the black and amber vest, by Eoin Taggart an excellent 8th place, followed in by David Mansfield, no doubt finding the race about 20 miles too short, in 18th. Next in was Michael Cassidy in 54th, Sean Doran 65th and Conor Keane 100th. In the team standings the lads were just shy of the medals finishing in 4th place.
For photos from today click:  https://picasaweb.google.com/101280007722910682928/GloHealthNationalJuvenileUnevenAgesNoviceXC