Shane Rooney Reports: Clonliffe Harriers athletes, along with Coach Pam and Coach Ben were in high spirts and out in force to support the inaugural Ballymun Running Festival.

The running festival consisted of 5k, 10k and Half Marathon non-competitive races, and the crowning glory, the Ballymun 100 miler!!  The idea of the 100 miler and the Running Festival was to create awareness about mental health, the harmful effects of alcohol and to promote health and fitness and its powerful on healthy happy lifestyles.  The 100 miler was completed by the awesome Kenneth “Coco” Coakley and Gerard “Jolly” Prendergast.

Over 40 Harriers turned up to participate in this momentous event, and while many agreed they were doing it for fun and weren’t going to race it, this talk was kicked to the kerb the moment the starter shouted Ready, Steady…..GOOOO!!!  First out the block was Anto Doran who, from the off, keep out in front during the 18 laps of Trinity Comprehensive School.  Second and Third home for CH AC were the husband and wife combo of Rachel & Alex Eustace who ran neck and neck, but it was Rachel who sprinted home to victory, leaving Alex regretting eating that extra bun on Sunday. A battle royal ensued between Maura Matthews and Declan Grant, would Dec catch Maura, would Maura kick to the end…it was Maura who crossed the line first, setting the scene for an epic clash at next Grand Prix race.  What was especially great to see were the club members digging deep around the 18 x 550 mtrs laps, and cheering each other as we crossed the line, proving that being part of Clonliffe Harriers is much more than winning and PBs, it’s about building positive physical and mental health.

A special thank you to the hosts Deca Ironman Ger and Robert Murphy, the great support from the locals and to all the club members, who together raised over €310 for AWARE.

Until next time, keep digging in and run with your heart. 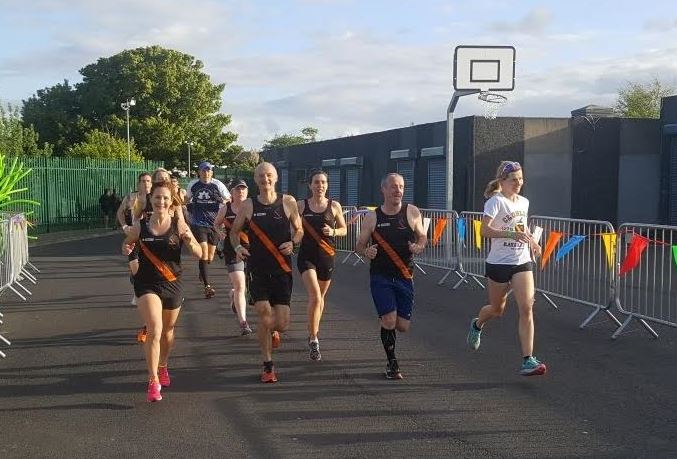