The club 800 Championships took place in conjunction with the latest round of the ever popular Grand Prix Series in a warm and sultry Morton Stadium last night. Once again a great turn out meaning multiple races across the spectrum. The A race as expected turned out to be the men`s 2015 Championship decider as Tom Sherlock battled it out with young pretenders Niall Norman, Matthew Jenkinson and top race walker Greg Hossenny. On the back straight for the last time young Jenkinson took up the running however was overhauled with 200 to go, also at this stage Greg was cut adrift as Niall Norman went a fraction too early playing into the hands of the Wiley Fox Sherlock. 50m to go and it`s all over: the 2015 Champion is Tom Sherlock (2.04.75).

The women`s champion came from race no. 3 and fittingly with a win as Geraldine Reilly lead the mixed race on a merry dance to take a fine win in a fraction under 2.30. (2.29.9), 2nd Louise Carragher, 3rd Aisling Andrews The was a win also for young Amy Connolly, taking an exam break, in race no. 4.

The Grand Prix winner was Mandy McMenamy, with Sinead Duffy in second and Clare Scally in third place. 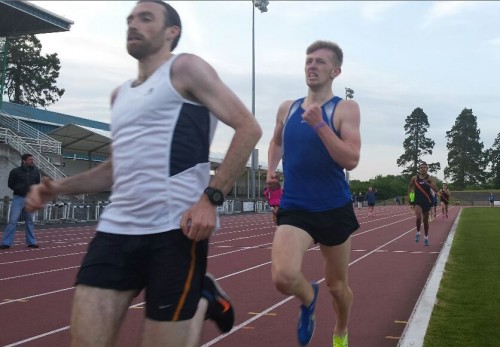 Post race another fine turn out for the presentation in the club house, and more great refreshments from the one and only Caroline Tuite. Thanks to all on the night and in particular Grand Prix 800 sponsor Richie Barr. Next up is the Michael Murphy Memorial 5 Mile in Malahide Castle Thursday next 8.00pm