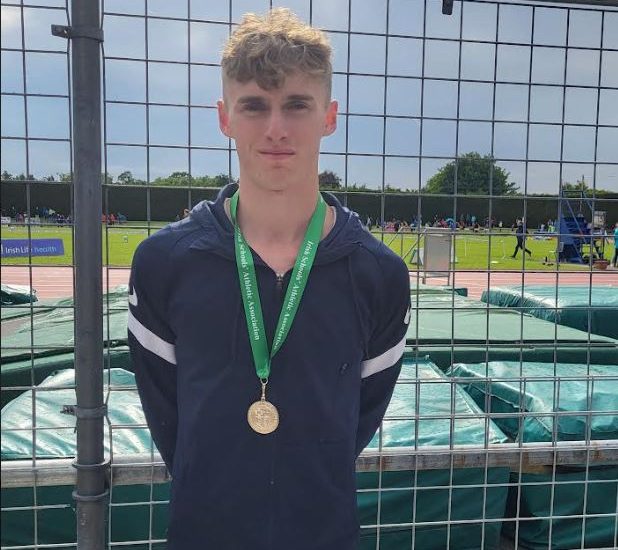 Eugenia Bateson reports: Tullamore,  it’s been a while!! Boasting sunshine, a cooling breeze and a quality new track,  it’s great to be back!

The first of the Clonliffe Harriers A.C finalists took to the track in the steeplechase.  Sam Murray and Lorcan Benjacar represented St. Aidans and Ard Scoil Ris in the Inter Boys 1500. S/C. Brilliant performances from both with Sam taking the silver in 4.41.32 with Lorcan taking Bronze in 4.45.37.

Next up the impressive Niall Carberry for Ard Scoil Ris in the 2000m S/C. Niall was dominant and threatening from the gun. He was not phased by jumping the Barrier at the 150m mark at 3 different heights before it was set correctly focused on the task in hand. A bad land coming into the 3rd lap gave advantage to Sean McGinley. Niall quickly regrouped and was undeterred by a possible strain and showed no sign of weakness.  He finished an impressive 2nd in a time of 6.05.29.

Inter Boys 100m saw Jaydon Carroll take to the blocks for Castleknock College. Jaydon is displaying great promise and potential.  Unfortunately, 100m didn’t work out today but that all changed in the 200m where Jaydon took the bronze in 24.64 at these National Championships.

800m and the wind picks up. Inter boys saw the turn of JD Kelly for St Joseph’s Rush and Jonathan Fitzismons for St Kevin’s College.  A very tight first 400m in 59secs made the bell a burner. JD was on fire at the bell and took the lead. He didn’t have it easy as all had their eyes on the prize. JD got a well-deserved silver on 1.58.34 with a surge from Senan O’Reilly at 15m to go taking the win in 1.57.82. Johnny continued his high performance displayed this year representing his school well in this race finishing with a time of 2.03.04.

U16 Boys Mile and the turn of Matei Usarachi representing St. Paul’s Raheny and Sean Cronin of Colaiste Ghlor na Mara.  Slow burner with an opening lap of 68 sec Sean sat in 5th with Matei in behind him. Tactical running Sean moved up to 2nd on the bell and then took off with 120m to go.   Fought for the gold but Sean took a fine sprint at 80m to go for a clear win in 4.29.24. Matei ran a strong race pushing to the finish.  This spectacular race finished the individual races for the Clonliffe Harriers gang with a nice haul of medals.

Well done to all our athletes who took part in regional qualifying rounds and particularly to the boys representing in the finals. Best of luck to all of you sitting the Junior and Leaving Certs on Wednesday.