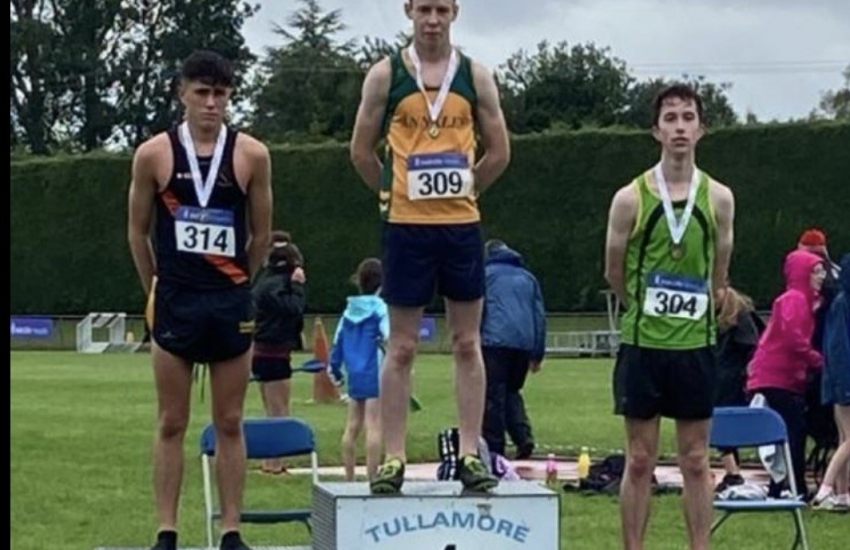 On the first weekend of the Juvenile National Championships – the weather made for a ‘wintery’ experience.  With the Covid-19 cloud still looming, the scene was set for a somber grey event with the noticeable absence of the Black and Amber support that usually lines the track to cheer on our finest young athletes.
However, a trio of silver medals gave a lift to the juvenile athletes and their coaches, who unfortunately were unable to attend due to restrictions.
Saturday saw the Steeplechase crew take to the track.  First up was Sean Boyne in the U18 3000m S/C.  Sean bought home a Silver Medal in a time of 10:20.75.  Sean is developing into a fine Steeplechase runner with a strong performance in his first Nationals in this event.

Sam Murray and Cillian Keegan competed in the very competitive U17 2000m S/C.  This was also a National debut for both Sam and Cillian in this event and they were not outclassed.  Sam finished a very strong impressive 2nd in a time of 6:54.97 with Cillian coming across the line in 5th in a time of 7:26.05.

Other events on Saturday included U15 Matei Ursachi in the 800m.  Unfortunately, on this occasion it wasn’t his day but we look forward to his 1500m next weekend.  Also competing in the 800m was U17 JD Kelly, who was strong in the pack up to the final bend where the lactic hit and he ran out of steam finishing 5th.  JD will run the 1500m next week.
Katie Halpin ran in the U19 800m but in the difficult conditions was a race Katie would rather forget.  The Leaving Cert year has taken its toll on many an athlete this year.
Under 15’s were also represented by Ava Usanova and Jaydon Carroll in the Sprints.  Jaydon was unlucky to miss the final by one spot in his heat .  This was Jaydon’s first National Track and Field but there is no doubt he has a great future ahead.  Ava Usanova was busy this weekend competing in the 200m, 100m and Long Jump.  While unfortunately Ava also missed out on making the finals in the sprints, she has gained invaluable experience.
Sunday 8th August saw the 3000m races.  Sean Boyne made the return trip less that 24hrs after his Steeplechase success but it was a race too soon rather than a race to far.  He was unfortunate to be in a fast-paced race in which Nick Griggs set a championship best.
Sean Cronin ran the U16 3000m.  Following a photo finish and a difference of .05 of a second, he was awarded the Silver.  A Championship best saw the Tallaght athlete prevail on this occasion again showing a very fast-paced race.  Sean is also competing in the 1500m next weekend.

Well done to all and we look forward to next week’s events to close out Track and Field Season for Juveniles.