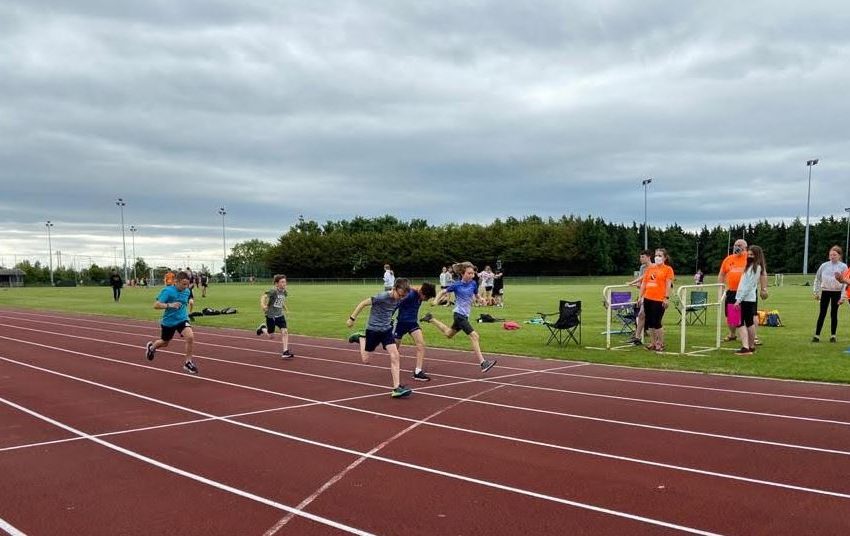 Sarah Bateson Reports: The long awaited return to juvenile competition has come and with it brought great whether. Yesterday was a day of 80m/100m and 800ms. The Harriers turned out in great numbers today to the ALSAA track with a hunger to compete again. The day commenced with a combined U14/U15 girls 100m with an impressive win from Ava Usanova hot off her second-place result in the Dublin Championship on Friday night. She was followed closely by Emily Jackhna and Rebecca Walsh respectively. The U14 race saw Harriett Kenny take the win, Niamh Cooper in 2nd and Iseult Doggett-Finnie in 3rd. The boys U15b 100m was another stellar performance with Jake Kane, Noah Rossi and Issac Moss showing their class to gain top points. This was then followed by the mighty athletes from Glady’s group with 80m sprints, where we saw the real proof that those sprint relays on the infield pay off.

The U9 Boys and Girls took to the field events next.  The future Stephen Rice’s and Anita Fitzgibbon’s showcased their javelin skills in the mid-field. The girl’s winners were Sarah Thomas who showed fantastic form, followed by Ava Fagan and Kayla. The boys champion was Raul who showed a natural talent, with Darragh equally impressive and Sebbie showcasing fantastic throws from the clubs most recent recruits.  The future of Clonliffe’s throwers is in great hands

The day was then capped off with a return of Anne and Graham’s finest athletes in an impressive battle in the 800m. The boys went out strong from the start and came through 400m in a very close pack. Rory Quills sprinting skills showed with a kick from 300m securing him a 2.17 win. He was followed by Jake Kane 2.23 and Noah Rossi 2.30. The girls put on another very exciting performance, with Rebecca Walsh taking it on from the start. Coming through the 400 the experience showed with single-file formation. Rebecca kicked early followed closely behind by Emily Jackhna. The final results were Rebecca Walsh (2.44), Emily Jackhna (2.48) and Ava Usanova. The U14 win was taken by Harriet Kenny in (2.50), Niamh Cooper and Iseult Doggett-Finnie.

But the athletes weren’t done. The 2019 Dublin Champions took on the boys for a girls vs boys challenge 4×100 relay. It was a close race from the start with Emily sitting on Issac’s tail, at the changeover Rebecca was first to receive the baton, as her and Noah raced stride to stride to hand over to Harriet and Cathal. Harriet edged passed Cathal in a tight sprint to pass the baton over to Ava. Jake put on a strong chase but Ava’s national experienced showed brining the girls home in first place.

The group looks forward to another trip to ALSAA this Sunday for the next round of the competition.