Clonliffe got off to a great start at Friday nights Dublin Juvenile Indoor Championships in the Morton Stadium, day 1 or 3. The club`s two athletes in action on the track tonight were Laura Tuite and Sally Aherne in the U/17 1500m, which for obvious reasons was actually outdoor. Both girls ran very composed races tracking the early leader who at one stage had a 10m lead and then closed the gap to hit the front with 200 to go, Laura finishing 1st in 5.13.33 with Sally 2nd 5.14.29. Both girls taking their first ever individual track medals and qualifying for the Nationals in Athlone on the weekend of March 23rd/24th..

Meanwhile the long jump was taking place in the indoor arena where Megan Coomber successfully noched up another Dublin title winning the U/18 event with a best of 5.28m.

Saturday and Day 2 of the championships brought more success for the club from the young athletes. There were two medals won in the boys U/19 200m with Samual Oyediran 2nd and David Deignam 3rd. Good run`s also over the 200 from Kate Hession 5th in her U/17 heat, Ciara Lynott 4th in her U/18 and Dylan Gibbons 5th in his U/17.

In the afternoon action focused on the middle distance events with the 600m – 800m. There was a great turn ut of athletes in the younger age groups meaning several heats to qualify for next week`s finals, again some impressive running from the Black and Amber: Abbie Sheehy 2nd in her U/12 600, 2nd also for Hope Suliman in the U/13 600. 8th for Ben Guiden in the boys U/13 600. In the U/14s running 800m Lauren Carr impressed finishing 3rd in her heat, a good run also by Harry in the boys race. 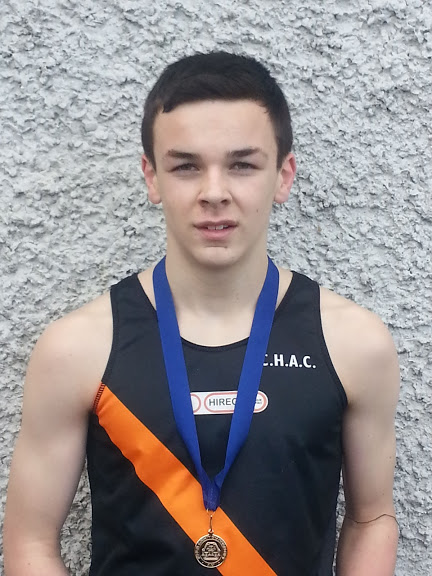 The final event today with Clonliffe interest was the boys U/15 800. Here running his first ever race Darragh Boyle was most impressive running an opening lap of 67 seconds and then closing the gap on the leader on the back straight to strike for home and win the Dublin Indoor title in 2.17. A fine battling run also from Fintan McManus who placed in 7th place.

Day 3, the 60m races took place today (Sunday). Another huge crowd in the stadium, the fine weather clearly playing a part. There were a lot of Cloniffe athletes in the early rounds some getting through to the next round, however, at the end of the day the sole medal “bagged” came courtesy of long jump champion Megan Coombe who finished 2nd in the U/18 60m in a pb of 7.9.

So in all a pretty successful championship, the event making a nice break in training and providing some welcome competition with a nice collection of medals and pbs to boot!