Dave Flynn showed a welcome return to form for Arkansas today in the NCAA Division 1 South Central Regional Championship at Agri Park, Fayetteville, Arkansas. Flynner was 23rd in the race held over 10,000m in  31.24.3 and was 5th scorer for the Razorbacks, making the scoring for the first time since his season`s opener. The Razorbacks in finishing 2nd team qualified for the NCAA division 1 Championship which take`s place on November 17th  for the 42nd time. Raheny`s David Rooney for McNeese State had an outstanding run finishing 2nd in a superb 29.41.4. See http://www.arkansasrazorbacks.com/SportSelect.dbml?&DB_OEM_ID=6100&SPID=2418&SPSID=33709 for Arkansas Razorbacks report. 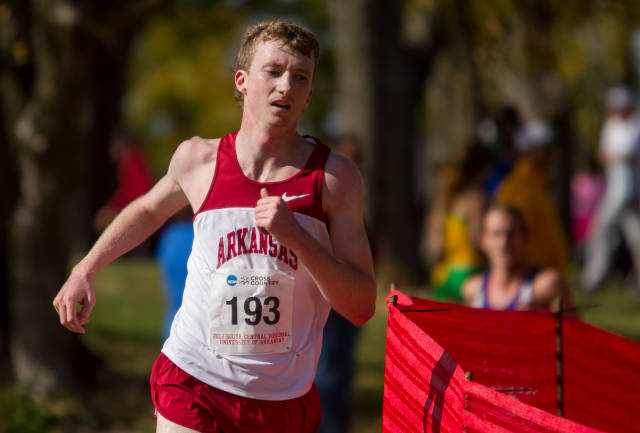 “Off to the big show

After SEC conference and disappointed with my race I approched our coach and told him if I wasn`t in the top 5 scoring at regionals I would not have them them fly me home for the inter counties , a bold move on my part.  But maybe  just the motivation  needed at the time.  Yesterday Arkansas were hosting regionals for the first time in a while and when we came to the course that morning it was quite hot with 30 mph winds . John McDonnell was there and he gave me probally the greatest advice I`ve ever heard:  “this is how you will run the race. You will go all out for the first 5k and sprint the last 5k.”  Nothing better then some Irish humour to calm the nerves before a race and with one of our top guys going over his ankle 5 minutes before the race there was a bit of panic around the camp but nevertheless our great physios worked their magic and he was good to go. The plan was to run the first 5k at race pace and cruise the last 5k because of NCAAs  being next week it would be tough to run two all out 10ks in two weeks. I kept with the lead pack to 5k and kept the last 5k conservative finishing in 31.24 23rd and all region honours on a very windy day and 5th scorer on the team booking our ticket to NCAA. I`d taken a bit of a risk this cross country season doing 110 mile a week for 8 weeks, pushing my body further then its ever gone and hoping that later on in the season when it really matters it would pay off . Up until yesterday I thought I`d  made a huge mistake thinking to myself “America has made you soft you`re  not the tough cross country guy you use to be. ”  As every athlete knows, howver,  a million thoughts go through your mind when things aren`t looking good .Finally the training is paying off.  I`m starting to feel strong and comfortable during races .

After the race I went up to my coach and said ” Better book that ticket home for the trials”,.  He smiled and said it will be done Monday. To be a scorer on the number 10 ranked team in the country is a great accomplishment for me and to keep the Arkansas tradition going in Clonliffe is even better. A number  of people yesterday what nil desperandum (tattoo on my leg) means I told them its latin for never despair and I realized that all this time worrying about my form lately all I had to do was remember the Clonliffe moto: Nil desperandum . Untill next time amigos.”  Dave Flynn