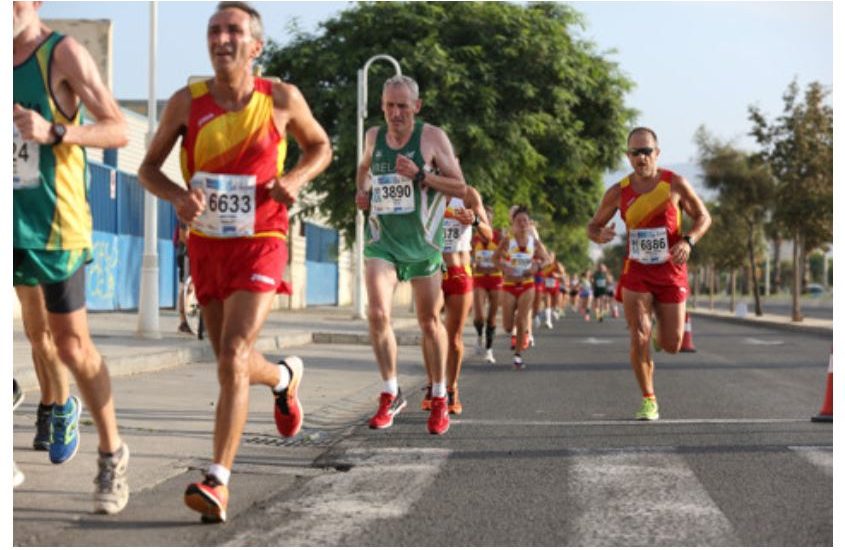 World Masters M55 Half Marathon September 16 Malaga – Philip O’Doherty
It’s 32 degrees in a burning hot stadium in Malaga in September 2018. I’ve just crossed the finish
line in the World Masters’ Half Marathon and immediately collapsed into the arms of a Spanish
steward. I’m completely dehydrated and have to be carried on two men’s shoulders to the
paramedics’ ambulance. As I sit there for the next hour trying to take in water and recover, I
wonder what madness had got me to this point. I couldn’t feel any worse – I’m physically shattered
and mentally upset at letting the Irish team down. It certainly felt like the worst of times.

It started three years earlier. A month after making the semi-final in the World Masters in Lyon in
the 800m, I had come down with a niggling injury. It turned out to be Posterior Tibial Tendonitis – a
notoriously difficult injury to cure. In the next two and a half years, I spent more time in the gym
doing rehab than I did running. By the start of 2018, I was able to manage normal runs but no real
sessions and getting in less than 25 miles a week. I wouldn’t be running an 800m for some time.
That Spring, on a warm-up run before coaching a Tuesday session, Paul Moran and I started talking
about the World Masters in Malaga. Paul wanted to go and compete in memory of his Father, who
had recently passed away. I’m not sure who suggested it but I was roped into competing to make up
an Irish team for the M55 category. I supposed I relished the idea of a new challenge.
Seven months later, I’m on the start line feeling good. Ok, I hadn’t actually run more than 12 miles
in training but I had done a decent 10 miler race in August finishing in 65:20. Another month on, I
could improve my average pace from that race and finish in 86 minutes or so. Not earth shattering
but OK for a 58 year old 800m runner.

Looking up the start list, there’s 12 countries entered in the M55 category. The Irish team is me,
Paul, the great Tommy Hughes and Michael Cornyn with three to count and cumulative times
deciding the placings. Tommy is only back running after an operation and is nowhere near his
normal form but it’s great to have him there. Michael has come to Malaga to compete in the 400m
and 800m, so is out of his comfort zone but he’s always available to help make up an Irish team.
My plan was to go out at around 4 minutes a kilometre, and allow for fading in the second half of
the race. We were facing a two lap course run completely on exposed motorway and finishing in the
stadium with a 300 metre section.

I felt really good, and coasted through the first 10k in a little over 40 minutes. As per plan, I slowed a
little but was still comfortable through 16k in around 66 minutes. A little off my target but with a
strong finish, I might get a little time back. At this stage, I’m ahead of Tommy Hughes who I had
passed in the first lap. Paul Moran is running with the M55 leaders several minutes ahead. Michael
is working away and still there to score for the team, if needed.It’s around now that I really start noticing the heat. I seem to be fading with every step. The next mile goes by, I’ve run 7:12 – I’m clearly struggling and going to have to manage the last two miles.

Mile 12 in 7:18; not great but I’m hanging in there. At that point, it all collapses. I can barely keep a straight line. Concentrate, I tell myself. I frantically try to examine the numbers of the runners streaming by me – any M55s? I don’t see many – just keep plugging away.

Finally the stadium appears and there’s just 300 metres left.
I’m staggering from side to side, hardly moving. I’m told later, by Irish spectators, that they didn’t
think I would make it. Two minutes 40 seconds later, I cross the finish line and my legs can’t hold me
any more. I’m taken away, severely dehydrated and gradually recover, cursing my performance.
Paul had finished fourth in an amazing time of 78:28. Tommy had passed me somewhere in those
last three miles to finish in 88:29 (he’s since run an M60 world record in 71:09) and Michael came
home a bit further back. My finishing time was 92:32.

Three hours later, we are sitting having lunch. I’ve been checking the results to see where the team
finished – they are slow coming out. Finally, they are up – we’ve taken bronze. Our cumulative time
of 4:19:29 had beaten the Portuguese into fourth place by the tiny margin of 35 seconds.
A World Master medal – it was really the best of times!