Brian`s letter from America: So on Wednesday last myself and a huge team in force travelled to Abeline Texas for the Southland Conference championships. Abeline is located in the central plains of the state of Texas (about 150 miles west of the Dallas Fort Worth metropolitan area – a whopping 11hrs bus ride from Lake Charles). It was a very dry cold and windy day. Temps were 38F (3C) considerably colder then SW Louisiana. Very strong winds made (25+ mph) made a seemingly fast course somewhat slower.
We were the highest ranked going into it, but we were left crushed after tieing for first place and loosing on count back. The race director estimated that it might even be an NCAA record for two teams being tied so closely together (take a close look at the places each man scored between the top two teams).
It’s a heart breaking defeat, and to say I am absolutely dejected is an understatement. But that’s sport, and this is life. I refuse to hang my head.
I finished 16th in 25:15. I was only beaten by Juniors, Seniors and graduate Students (3rd and 4th year students. I am a Freshman and I’ve 4 long years to go.
It wasn’t all bad either, in light of my efforts this season, Southland Conference voted me as the Conference Freshman of the Year, an achievement I’ll cherish forever. Next up is NCAA Division 1 South Central regionals in College Station TX in two weeks time. I look forward to rest and recovery in the mean time. 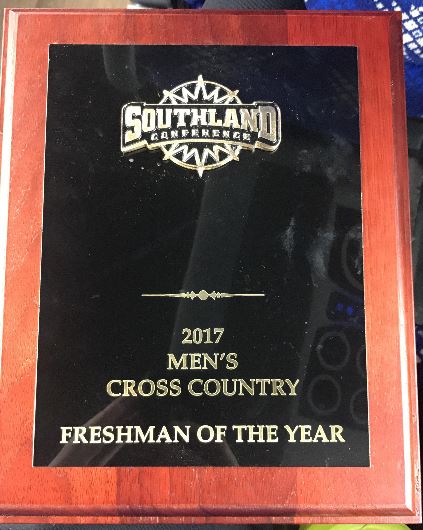