A simply magnificent day for Clonliffe Harriers at the National Cross Country Championships in Abbottstown yesterday.  The Holy Grail has been recovered and after its three year residency in Raheny safely rests now in Santry.  The Clonliffe Men’s team put in heroic performances running themselves into the muddy ground and in the process pulverising the opposition:  Clonliffe Harriers 1st – 52 points, DSD 2nd – 88 points, Raheny 3rd – 125 points. 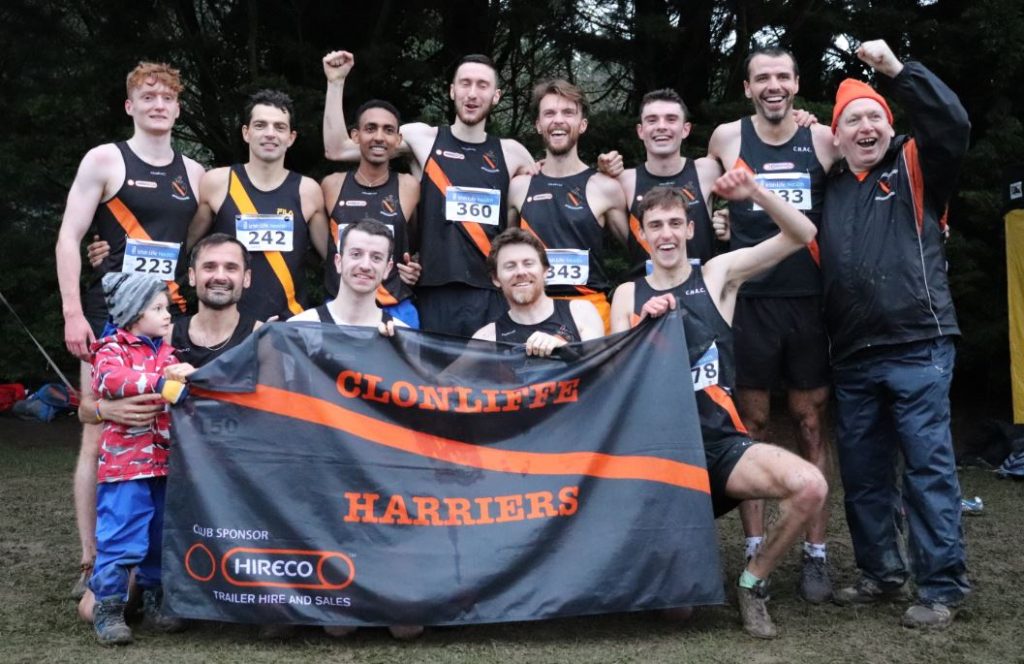 There were magnificent performances from all of the men led home in 9th place by Efrem Gidey.  Efrem of course is in his final stages of his junior career before turning senior on January 1st and the decision he and the club captain made to forego the junior and race in the senior paid off in dividend.  Efrem got himself into the lead pack from the off and although tiring over the latter stages he held on grimly to come home in the top ten.  Jayme Rossiter ran possibly his best ever cross country race, certainly his best ever National, to power home in 11th place skipping over the mud.  Next in was Cathal Doyle in 14th place after another very strong run and the ever reliable Colm Rooney with yet another magnificent National to be 4th scorer in 18th place.

Huge credit goes to the rest of the team, and a team it truly is.  In 23rd place, a man who has delivered time and time again for Clonliffe Sergiu Ciobanu, with Mark Kenneally in 26th.   Extraordinarily enough the statisticians say that this was Mark’s first National since he won the title in 2010.  His calming professional influence over the whole team cannot be overemphasised.  In 43rd place after a very solid run was Eoin Taggart with the man who is obviously drinking from the fountain of youth Killian Lonergan in 51st place.  In 55th place Ian Guiden who showed such determination to get to the start-line carrying an injury and then showing even more steely grim determination to drag his body to the finish line.  67th place was Sean Doran, Liam Roarty, ever dependable to turn up for Nationals, was 96th and young Jarlaith Jordan again showing grim determination to finish the 10,000, an awful long distance for an 800 track man, 148th.

The athletes racing yesterday served up a classic. After a fairly easy opening Kevin Maunsell (Clonmel) was the first to test the pack, putting in a burst and opening an early lead, however, that was quickly closed and then at half was Tullamore’s Liam Brady using his strength over the sapping conditions opened a big lead that looked like a winning move. With one final circuit to go Brady’s lead was back to only 15m as Brian Fay (Raheny) and Sean Tobin (Clonmel) had eaten into his lead and coming off the hill Fay was almost in touching distance until Brady drove on again, his bravery being rewarded with a first national senior title.

The Clonliffe Junior Men’s team defied all the odds to retain the National Junior title.  Despite ‘losing’ Efrem to the seniors the lads raised their game even more.  The scoring four were Aaron Cullen in 12th, Ben Guiden 15th, Stephen Cashin 21st, Calum Simpson 42nd and these four were ably supported by Alex Murray 59th, Ian McElweney 67th and Daniel Lacy 89th.  An interesting aside is that Ben Guiden was the only one at the scoring four today, to have been in the scoring four in 2018 – a true sign of strength and depth when basically a whole new team can retain the junior title, furthermore this was the 4th junior title in 5 years.

Thus it was a magnificent double and fittingly of course the junior team bringing the Lar Byrne Cup back to Santry.

The green shoots with the women’s team continue to grow with a full Senior Women’s team competing, something which hasn’t occurred for a few years.  The six ladies all battled gamely over the 8000m course with Ailish Malone running herself into the ground in 46th place.  Laura Tuite had a very good run in 67th.  Likewise Alannah Cooley 69th and Emma Cooper a strong 70th with Clodhagh Galvin 75th and Maura Matthews battling all the way to the line to finish in 77th position.  When the numbers were totted up the team had placed 7th.

There was a full compliment of Clonliffe vests on show in the Junior Women’s race.  Good battling performances from all eight of the team, Sarah Bateson led the team home with Katie Halpin only one place behind her, a fine run also by Aoife Hession and by 4th scorer Abbie Sheehy (there seems to be a bit of a glitch in the official results on the placings but it would seem that Sarah was 52nd, Katie 53rd, Aoife 57th and Abbie 59th.  Fine runs also from Hannah Browne, racing for the final time as a junior, Alana Fitzsimons, Ella Brown and Tess Loftus.  The junior women are on the resukts as 10th, but those results are questionable.

The other star of the day of course was Sean Cronin who was simply superb in the boy’s U/14 race.  In the top two or three for the whole race coming up the hill for the final time it was neck and neck, however, Sean’s superior strength paid off in spades as he powered up the hill towards the finish to be crowned the National Champion to the cheers and delight of the Clonliffe supporters.   The rest of U/14 team performed magnificently with Lorcan Benjcar 53rd, Devan Morrisssey 90th, Mark Goss Keogh 110th and Cian O’Hare 150th.  The team finishing just out of the medals in 4th position.

Huge congratulations to all of our athletes on their performances yesterday.  To the coaches, to all involved and in particular Joe Cooper, yesterday was his 12th national cross country win.  It was a special day for Clonliffe Harriers and a magnificent team effort.