Kevin Loftus reports from Santry: In what was practically arctic conditions at today’s GloHealth National Novice/Juvenile Uneven Ages XC Championships there was a mixed bag of results.  However it must be said that the star performer of the day was Brian Flanagan who secured Under 19 National Silver and a most coveted place on the Irish XC Team for the Celtic international. 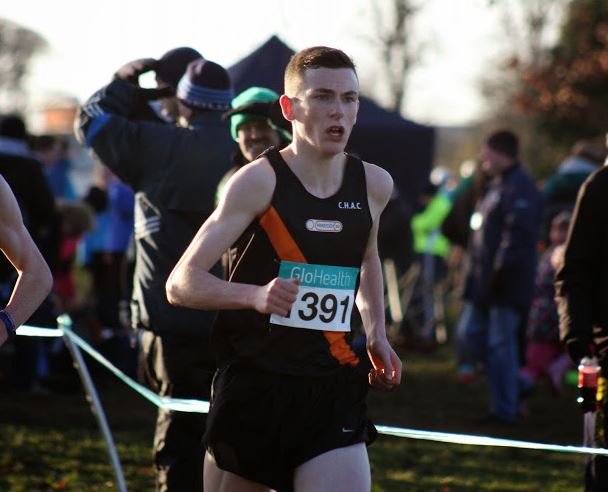 Today a near freezing, blustery day for competition with wind chill lowering temperatures to just above 0 C resulted in hampered displays of form from our young athletes.  Despite this, the brave and undeterred harriers set out to compete at National level against the very best, representing their club with sheer excellence.

Thankfully there was no rain at today’s event yet, as always, soft underfoot conditions proved a nasty addition to the labyrinth that was the course.  Competitors had to complete, in most cases a lap of 1500m which encorporated steep inclines and gradual descents that inevitably tested all of the athletes.

Our first daring Clonliffe Harriers racing today were members of the Under 11 Boys team lead home by J Fitzsimons who found the course slightly overwhelming.  A strong effort shown by M Coleman and a fine sprint finish from J McDonnell.  The team was furthermore supported by the ever improving G Browne and D Shinbach.  A good team effort that will stand to these young athletes.

There was a similar story too for the Under 13 Girls team who, having been broken by injury and sickness were struggling even before the starting gun was fired.  Surprisingly however we saw brilliant determination from them, in particular a wonderful finish from young R Fagan.  For many of these girls it is their first ever time competing for their club at such a high level, and this does not go unrecognised.  Next in was E Browne followed by A Hodson who both had poor starts to the race yet building on this they went from strength to strength and finished strongly.  Not too far further down the field saw A Scott  and V McDonnell put in improving performances to finish in 83 and 120 respectively.  Unfortunately having fallen mid way through the race E Bergin was forced to retire.

Completing 3500m, the Under 15 girls showed how their weekly training has enabled them to compete at this high level of competition.  First home was L Carr displaying her commitment to a long season of training.  This was followed by the ever improving trio of H Browne, C Cooley and A Connolly; all of whom will benefit greatly from the experience they gained at these championships.

The Under 15 Boys were next out of the starting shoots, again having to complete a course of 3500m.  This race saw S Cashin, yet another athlete who has dedicated himself to months of hard winter training, finish in a fine 51st position; building immensely on his performance at these championships last year in Waterford.  He was strongly supported by B Guiden closely behind him who was caught in the home straight, finishing in 53rd.  The team was then joined by H Pierce who battled to the very end in 100th.  C Giles who lead the entire race pack at the very beginning of the race, and who was a front running contender for today’s medals did not finish when a recent knee injury reoccurred at half way.

Clonliffe had but one athlete competing in the Under 17 girls race today.  A Cooley fought her way valiantly to the end in 39th position, showing a surprising burst of brilliance in the final stages of the race particularly.

This race was closely followed by the Under 17 boys race, in which we had a full team and thus a full range of results.  Although slightly plagued with injury and older athletes
having moved up an age group this team consisted some familiar as well as new faces.  In a thrilling, strategically thought out race, A O’Brien failed to disappoint with a remarkable 6th place finish; never being far off the leading pack.  He was well supported by S Carrigg and J Hession in 24th and 30th respectively.  Finishing strongly A Gibbons was next in, followed closely by K McKenna and T Ward.

In a shocking turn of events, the Under 19 boys race was in many ways a brilliant race from a Clonliffe perspective.  B Falnagan showed a wonderful array of his talent working hard as pace maker for 90% of this race, leading the pack, only to be overtaken in the final home stretch.  Despite this, this is an amazing achievement for Brian, recognised not only here in a Clonliffe but also by Athletics Ireland in awarding Brain with a worshiped place on the Irish XC team.  Next home for us in a very credible 24th was C Doyle.  Running all the way to the finish N Norman arrived in 41st, with R Kearney and P Courtney fighting well to finish in 53rd and 55th respectively.

This wraps up the Juvenile Club XC season for 2014, and what a season it has been.  After a much needed and rewarding Christmas break the Schools XC season begins again.  Well done to all for braving the elements today on a day that wasn’t for the faint hearted.  A sincere thank you to all who participated in the organising and helping out at today’s event; it simply wouldn’t happen without the commitment of all those who have dedicated yet another day to this sport.

The results below are PROVISIONAL and are subject to change following publication of official results.  If any results have been omitted please feel free to contact N Guiden (0879599888) or K Loftus (0862205431).

Moving on then to the GloHealth National Novice Championships there were huge fields in both races. The men`s race in particular with circa 400 starts making up nearly 25 teams. The Clonliffe lads put in very good shifts in trying conditions. By this stage the underfoot conditions were very slippery indeed and the biting cold wind was now blowing even harder and colder. First in for the team was Tom Sherlock 35th, with the rest of the scoring 4 made up of Ernie Ramsey 83rd, Sean Doran 110th and Conor Keane 114th. The team placing 12th. The other clonliffe runners were: Dave Brady 127th and Richard Mannion 153rd.

The Novice women`s team were stepping up considerably today in what for most of the squad was the biggest race of their athletics careers to date. Again some fine performances from the girls resulting in a 10th place team finish. The pacings being: 53rd Louise Caraher, 56th Rachel Wisdom, 68th Bernadette Kiernan, 76th Bernie Byrne, 115th Aisling Andrews and 124th Emma Dunne. The team as a whole will benefit enormously from the experience gained in Santry today.

Congratulations and well done to all today, a great team effort from the whole club on the hosting of these championships.