Jeremy Chapman reports: As runners, in what is fast becoming a world of ‘Big racing’ ‘Big races’ and ‘Big entry fees’, sometimes it’s nice to go small…. to sneak out of the slightly over park-runned city to a quiet town where the roads dip and bend and rise again, and where wise old farm dogs bark without meaning any real harm. Kilmovee (Cill Mobhi) is a very beautiful and picturesque parish village in county Mayo sandwiched between Kilkelly and Ballaghaderreen and not far from Knock airport…Fergie Keenan had been banging on at us all for quite some time about going up to Mayo – and why wouldn’t he ?…don’t be fooled by that husky Dublin brogue – Keenan is Mayo blood and bone and it’s a perfect fit.
In fairness it wasn’t a hard sell and Conor Delaney and myself  were only too happy to make the journey early Easter Saturday morning to Kilmovee to run the Kilmovee 10k . 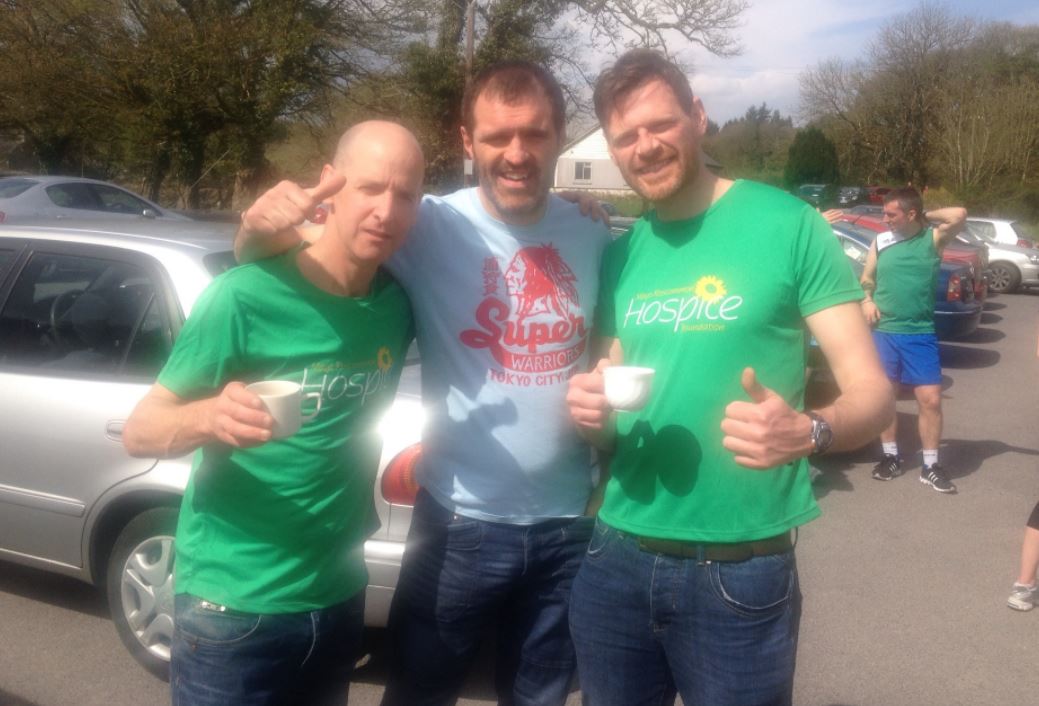 It was a short drive up …we listened to Nick Cave and Dexy’s and of course Damien Dempsey. You don’t travel with Fergie wihtout Damo..He is, it has to be said, a big fan of Damo and has been trying to convince me to sign up…so when I quite innocently from the back seat  suggested that one of the Damo songs sounded errr,a bit ‘Sawdoctoresque’ the car nearly swerved off the M4….what you *******mean!!!!……he was  not amused . I apologised for my insensitive remark and drove on in silence…..When we arrived in Kilmovee the friendly shuttle bus driver was waiting like he knew we were coming and shuttled us  1/4 mile off to Kilmovee Gaa club and the starting area. We picked up our numbers and t-shirts (Roscommon Hospice being the worthy race charity)  and headed for the start. It was very warm and Fergie had warned us countless number of times about how hilly the course was and in particular the steep climb at the final Kilometre to the finish .  Approximately 560 runners set off into the sunshine. The early part of the course wasn’t too bad and was flat enough. There were two well manned (Childrenned ??) water stations along the route – the bottles hitting the spot – the paper cups as usual miserably missing the gasping mouths by a mayo mile….when the 9k mark was reached and ‘Fergies Hill’ stood before me like the foot of Croagh Patrick there was no friendly shuttle bus driver, no local Sherpa to carry me home….the crowd at the finish line were absolutely fantastic…..bananas pears and orange quarters were handed out as you made your way along the finish area. After changing and showering back at the Gaa club we made our way back down to the Community Centre – the noise in the hall was deafening as the runners assembled ..all good talk…nothing big or brash and not many Garmins….i’ve seldom seen plates of sandwiches scones brack and apple pie  empty and fill up again like magic….all homemade and delicious with as much tea and coffee you wanted. This was community spirit at it’s unbeatable best. To the Kilmovee 10k race organisers  ,to the tea makers and brack bakers ,to the countless volunteers who made this such a special event to be part of, take a very large bow . Don’t change a thing (well, could you level that last Kilometre perhaps???). I for one will return next year…….for the record Conor ‘Bressie’  Delaney finished in 37.47 I finished in 39.10 and Fergie came home in 42.19….
Round up: Today`s Battle of Clontarf 10 Mile featured a few club members:   Philip O`Doherty 61.55, David Dunwoddy 63.03, Alison O`Sullivan 72.48. Full results click: http://www.championchipireland.com/results/index.php