At Sunday`s Dublin Intermediate Cross Country in Tymon Park Dmitrijis Serjogins took a fine win. Dima has been in good form this season having finished 2nd in both the Dublin Novice and Dublin Juniors in the past month.  Dima with a time of 28.36 for the 8,000m had a winning margin of some 13 seconds. With the team weakened due to athletes being on duty for their colleges at Saturday`s Inter Versity Road Relay the black and amber placed 2nd on 39 points behind hosts Rathfarnham (26 points)  with a scorring four of Dima, Darren Reilly 7th in 29.36, Kris Valters 8th one second behind  and Noumir Bouzain 23rd 30.37.  Other Clonliffe: 27th Tom Sherlock, 34th D. Ryan, 36th Clive Ahern, 43rd Ger Kirwan, 44th Conor Keane, 48th Tom Frayne, 53rd Joe Phipps and 60th Johnny Bradley Ward.

The big race of the weekend was of course the NCAA Division 1 final in Louisville where Dave Flynn placed 203rd as Arkansas finished 10th.

It being the weekend so our man Gary took to the roads and byways of our green isle, so Sunday and Gowan, County Kilkenny beckoned where Gary O`Hanlon took yet another win. The Stook 10 Mile in 51.59.

Congratulations to Clonliffe`s James Nolan on the success of his UCD squad in winning the men`s race from a field of 25 teams. Post race comment from James:  “I thought we would win before the start of the race but after the first mile leg I knew we were in for a tough time of it,” said Nolan. “It was an exciting race and I’m delighted we got the win in the end and it was a real team effort and one we have been working towards for the past couple of months. It’s a great reward for the lads and the backroom team including George Patrakos (strength and conditioning) and Ciaran McDonagh (physical therapist),” he concluded. 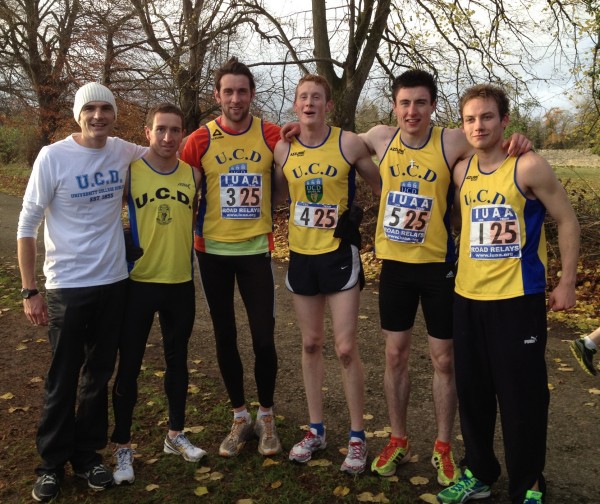