It`s now only 2 days to the 2014 Morton Games. The athletes are already arriving in Santry. The weather forecast looks good. With luck there`ll be a big crowd in Morton Stadium. Please however do your bit and spread the word now. The event web site www.mortongames.ie has all latest Morton Games news with only two days to Friday`s big night. Here are the latest stories:

2010 Commonwealth 800 bronze medallist Abraham Kiplagat (KEN) with a 1.43.77 pb to his name, is a confirmed starter for the 800 at this years Morton Games. This race will be an absolute cracker.  Irelands top three 800 metre men go: Mark English who is so close to a new Irish record, Paul Robinson and Declan Murray.

Australia’s Ryan Gregson, the Australian 1500 champion and London 1500 Olympian goes down in distance specifically for a very fast 800. Also dropping down in distance is another Aussie Jordy Williamsz.

There is also a top American pairing of Ryan Martin and Mark Wieczorek, Martin has the slightly faster PB at 1.44.77.

Three time Trinidad & Tobego National 800 metre champion Jamaal James who has a PB of 1.46.57 goes in this along with James Eichberger (MEX) who competed in last years Morton 800 and last July shattered his PB by running 1.45.88.  The field is completed by young Karl Griffin as he winds up his preparations in advance of the world juniors in Oregon.

The full field for the Morton Games 800 is:

Ireland’s Ciaran O’Lionaird makes his return to competition on these shores in Friday nights Morton Mile.  O’Lionaird has the fastest time in the field courtesy of his indoor mile set in New York in February 2013 of 3.52.10.  The European Indoor 3000m bronze medallist has recovered well from injury, although he has raced sparingly this season to date he aims to kick start his season by getting the European 1500 qualifying time in tonight’s race and then to press on for overall victory and who knows a good crack at the now 34 year old stadium record of Steve Scott – 3.53.80 and into the bargain collect the €1,000.00 bonus cheque.

The 2014 Morton Mile has the deepest field ever assembled for a Morton Mile with some one dozen sub 4 minute milers.  This years Meet sees the return of defending champion Cory Leslie (USA) who ran his PB in last years race of 3.55.86.  Two time Morton Mile winner Will Leer looks for his third win.  Leer’s mile PB of 3.56.39 will one would suspect go Friday night.  He has moved on to a new plane in recent years, in 2013 he was the US indoor champion over both the Mile and 3000 and this year was a finalist in the world indoor 1500.

The man to beat may be Pat Casey, the US 2014 1500m runner up, he has a PB of 3.53.71 set on the 31st of May this year.  With a fine win already clocked up in Ireland this summer at the Le Cheile International Sam McEntee (AUS) will also be in the mix along with New Zealand’s 1500 champion Hamish Carson. A good outside bet will be Kenyan Vincent Letting who was sixth in the 2014 Kenyan Championships and has a 1500 PB of 3.36.61.

Morton Games are honoured to confirm the participation in the Davy International Men’s 400h of reigning World Champion Jehue Gordon (TRA).  Gordon won the world championships in Moscow in 2013 where he ran his PB of 47.69.

The addition of Jehue Gordon to the Davy International 400h field is the icing on the cake of what was already an extremely classy race.  Gordon will be joined on the line by 2008 Olympian and world championship semi-finalist in 2011 and 2013 Mahau Suguimati (BRA), Irelands Thomas Barr, the National champion and defending Morton Games 400h champion who has ran a PB this year of 48.95 to set a new Irish record.  2011 Asian champion Takatoshi Abe (JAP) who has a PB of 49.46, British pairing of Ben Sumner – PB of 49.59 and Matt Sumner, PB of 51.26 (these two Sumners are not related), Northern Ireland and Crusaders Jason Harvey with a PB of 50.13 and Paul Byrne (St. Abbans) pb 51.41.

Gregan faces World class 400 in own back yard:

The full field for the Morton Games 400 can be confirmed. It includes Olympic medallist and Commonwealth medallists.

The man with the fastest PB in the field is Johan Wissman (SWD) with a PB of 44.59. Wissman has been a major feature at championship level throughout his career. Back in 2004 he was a silver medallist at the world indoor championships over 200 metres. Four years later he again was a silver medallist this time, however, over 400. At European level he won silver at the 2006 Europeans over 200 and in 2009 was the European Indoor champion over 400. He was also a finalist at the Beijing Olympics in 2008.

John Steffensen (AUS) is also a multi-championship medallist. He won silver in the 2004 Olympics over 4 x 400. In 2006 he was the Commonwealth 400 individual champion and was also a gold medallist on the Australian 4 x 400 team at those Commonwealth Games. His last major championship medal was in 2009 when he won world bronze 4 x 400. Steffo has a PB of 44.73 going back to 2006.

Another Olympic medallist competing on Friday is Manteo Mitchell (USA) making his return to the Morton Stadium. Mitchell was a 4 x 400 silver medallist at the London 2012 Olympics. In those same Olympic Games Jarrin Solomon (TRI) was a bronze medallist on the Trinidad & Tobego 4 x 400 relay squad. Manteo Mitchell’s PB stands at 44.96, Solomon’s stands at 45.19.

Two of our visitors from the USA will also be there or thereabouts. The dark horse on Friday night is Brycen Spratling with a 45.09 PB set as recently as the 30th of May last. He was runner up at the 2012 NCAAs and was 4th at the US Championships that same year. Interestingly enough he also holds the US collegiate record over the seldom run 500m distance. Also coming to Morton Games is young 400 metre man James Harris who was 5th at the US Indoor Championships with a PB of 45.23.

The Irish challenge will come from home favourite Brian Gregan of Clonliffe Harriers. Gregan is a great competitor and will have to draw on all his competitive instincts on Friday night to put himself into the frame. Gregan has an excellent record at major championships qualifying for several finals including the world student games on two occasions and of course he was a silver medallist in the 2011 U/23 Europeans. His aim on Friday is to go sub 46 and European qualification.

National Champion Brian Murphy (Crusaders AC) takes the final berth in the International 400. Murphy has a PB of 46.41 and a seasons best to date of 47.20. Friday night will undoubtedly see him run considerably faster than this in a field of this calibre.

The field for International men`s 100, sponsored by Fashionflo has been confirmed. There is a late addition to the field in Warren Fraser (BAH) a London 2012 Olympian. Fraser on present form the favourite to take victory on Friday having only in the 10 days set a new PB of 10.14, he was also a semi finalist at the World Indoors in Sopot in March. Unfortunately Marcus Lawler has decided not to risk things before the World Juniors and will miss Friday`s Meet.

The overseas contingent is led by the Australian Champion Brittany McGowan who has a PB of 2.02.24, runner up in those championships Selma Kajan also competes. Making her return to Morton Games is Scotland Emily Dudgeon who has qualified for the Commonwealth Games courtesy of her 2.01.89 PB. Also confirmed is British U/23 International Adelle Tracey an athlete with a 2.02.01 pb.

Our North American visitors on Friday are Phoebe Wright (USA) who boasts the fastest time in the field of 1.58.22 and Canadian Rachel Aubry with a PB of 2.02.56.

Also on her first visit back to the Morton Games since 2012 Sweden’s Lovisa Lindh who has not only lowered her PB to an impressive 2.02.74 but in the process she has clocked the European qualifying time for Zurich.

Cutts -v- Bychkov the re match:

Its back on! The Cutts –v- Bychkov rematch at Morton Stadium Friday night. Last year they were inseparable both setting a new joint stadium record of 5.56m as they tied in the competition.

Also competing tonight from Wales is Paul Walker who has a PB of 5.45 and looks to improve upon that on Friday. Our Swedish visitor is Simon Assarsson with a PB of 5.12 and back for a second Morton Games is Rhys Searle. 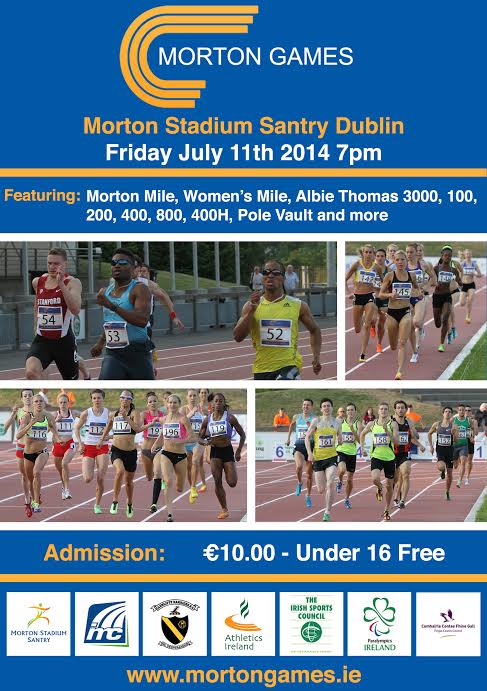