Clonliffe Harriers has enjoyed a long, happy and fruitful relationship with St. Aidans CBS  with maybe 1,000 plus pupils from the schools finding their way to Santry and Clonliffe Harriers as the red and white of St. Aidans fitted seamlessly with the black and amber of Clonliffe. This year St. Aidan’s CBS has reached the very significant milestone of their 50th anniversary.  The school is currently organising a range of events to celebrate this milestone with numerous social and sporting events planned.  To mark 50 years of athletics in St. Aidan’s the school in conjunction with Clonliffe Harriers A.C. is organising a special day in the Morton Stadium on Saturday October 11th: a unique past and present St. Aidan’s athletes 2 Mile track race. 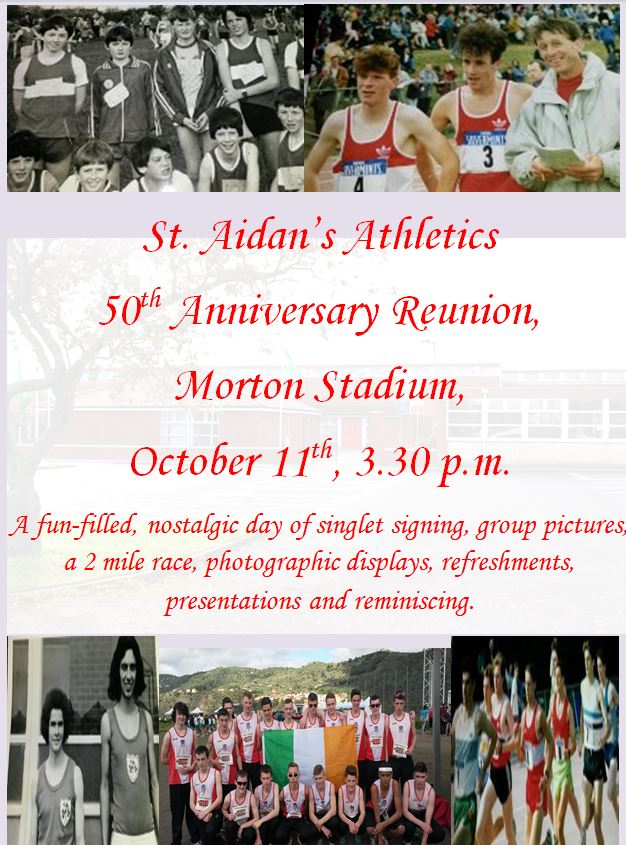 Many’s a St. Aidan’s lad and later a Clonliffe Harrier`s first introduction to our sport was the first year cross country league races held under the watchful eye of Bro. Clarke.   Those Friday afternoon league races were famed and feared.  Three laps around the two football pitches with instructions to make sure to run the full course and take in the dip behind the far goalpost.  The first year boys took to these league races with great enthusiasm with hundreds lining up to race and then on Monday morning checking out the notice board to see where they placed in the league.  Back then they were simpler times: cross country spikes were virtually unknown and boys either ran in their football boots or runners.  The prize at stake was a place on one of the schools teams and the chance to put on that red and white singlet for a forthcoming CBS or secondary schools championship.

Bro. Clarke’s enthusiasm was infectious and he was instrumental in encouraging these young athletes to remain committed to the St. Aidan’s cause with great numbers competing for the school in various championships.  So much so that there were A, B and indeed at times C teams.

The next great coach to take up the mantle after Bro. Clarke was Peter McDermott.  Peter was a Maths and English teacher in the school, more importantly from an athletics perspective he was a fine athlete running with Clonliffe Harriers.  Peter was instrumental in driving the athletics programme in St. Aidan’s onto even greater heights and he remained the athletics coach for some 25 years, simply extraordinary.  Peter in turn passed on the baton to the one and only Alan O’Neill.  Alan was not only a teacher in St. Aidan’s and also a Clonliffe Harriers but a local Santry lad and a past pupil of St. Aidan’s who himself had been coached by Peter.  Alan’s second in command is David Hanley and these two can be seen running along Collins’ Avenue to Albert College Park on Monday, Wednesday and Fridays leading a pack of 40 of the current St. Aidan’s squad.

Over the years the Clonliffe/St. Aidans` partnership has produced many champion athletes including Mick Byrne who is now the head coach in the U.S.A.’s top athletics college Wisconsin, Eamon Tierney, who holds the record for the fastest ever St. Aidan’s past pupil over the marathon distance of 2.16.07, the Greene twins Johnny and Martin, Noel Daly who held the Irish Schools 800 record for a long number of years, Derek Watters, Mark McDonald and Eoin McDonnell who dominated the middle distance track events during their time in St. Aidan’s and the schools most recent All Ireland track champion Ian Guiden who won the All Ireland 5000 title in 2013.  The greatest ever athlete to come through the school was Santry and Clonliffe`s Niall Bruton coached by Peter McDermott.  Niall was a true star in schools , juvenile and junior athletics. When he left St. Aidan’s he went on scholarship to the United States and developed into a world class athlete winning the famed Wannamaker Mile in New York and representing Ireland at the pinnacle of sport, the Olympic Games reaching the Olympic 1500m semi-final in Atlanta in 1996. The list of athletes in Clonliffe who came through the Whitehall stable is lengthy with junior teams in particular being dominated by St. Aidans men. Clonliffe owes a great debt of gratedue to the great coaches in St. Aidans Peter and Alan in particular.

The October 11th celebrations will start with a 3.30pm 2 Mile race on the track. St. Aidans and Clonliffe are reaching out to all St. Aidans past and present pupils who ever ran for the school to come along on the day. In addition there will be a social function in the Clonliffe club lounge featuring a photo exhibition, presentations and a change to catch up with old friends. Alan O’Neill said: “We are hoping that as many past pupils who competed for St. Aidan’s will turn up on the day.  This is an event which we have been planning for some time, needless to say it is next to impossible to contact everyone so I am asking for anyone who was in St. Aidan’s to help in spreading the word and anyone who wants to come along and compete on the day or indeed just come along to meet up are more than welcome and they might pop me on an email to elvi_213@hotmail.com”.