The Dublin Juvenile League remained in Tallaght for today`s 3rd round. A fine day, a little windy perhaps, but no complaints. A smaller group of Clonliffe athletes were in action today, with the Leinster Schools in Santry, however again fine performances from the Black `n` Amber. Lauren Carr was arguably the Harrier of the day with two fine performances at either end of the programme both yielding wins. After running 800 in the Leinster schools on Wednesday Lauren went down in distance to win the U/16 400 in 63.1, later she went up in distance to win the 1500. 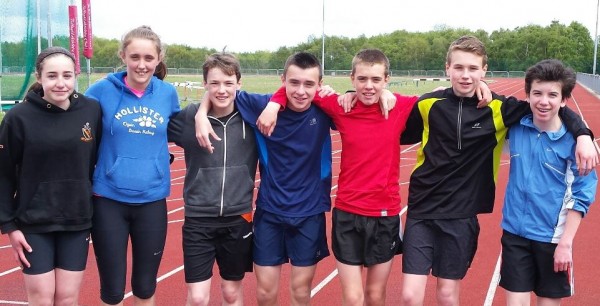 The 1500 was a good race between Clonliffe duo Lauren and Hannah Browne, after a slow opening lap the pace picked up two from home and with a lap remaining Lauren took up the running to win in 5.23, chased hard by Hannah 2nd in 5.30. Cliona Cooley once again displayed great battling qualities taking a place on the run in to finish 5th (5.45).

A great Clonliffe battle ensued in the boys U/16 1500, however, with the guys possibly watching one another an MSB athlete slipped their attentions to win the race but chased all the way to the line, and indeed the track, by Stephen Cashin as he hit the deck on the line (4.43), 3rd was Jack Horan, missing the break, in 4.46, 4th Daniel Lacey 4.49, 5th Jordan Byrne 4.59, 7th Sam Baker Gorman 5.30, Sam clearly feeling the effects of Thurday`s Clonliffe 2.

Another athlete going down in distance was All Ireland Junior 800 finalist Craig Giles (U/16) pumping out 400 for the first time and an impressive outing indeed 1st in 54.4.