At the end of season Grand Prix presentation night held in the clubhouse on Thursday last, December 5th Desie Shorten (Parnells) was announced as the winner of the Clonliffe Grand Prix Series 2013. After a season long battle on the track, country and road running from the 28th of March right up to November 30th Desie just got his nose back in front at the season finale the Irwin Cup to become the 13th winner of the Behan & Associates Grand Prix Cup. Desie was presented with the cup by club President Paddy Marley at a very well attended function.

The final top six of the 100 strong entry on the leaderboard were:

A great job throughout the season by the Grand Prix Sub Committee which included, Maurice Ahern, Eoin Murray, Caroline Tuite, Paddy Tuite and Gerry McCabe. Thanks to the series sponsors Behan & Associates and to all the sponsors of individual races throughout the series. Well done to all concerned. The 14th Grand Prix Series will start in the Spring. 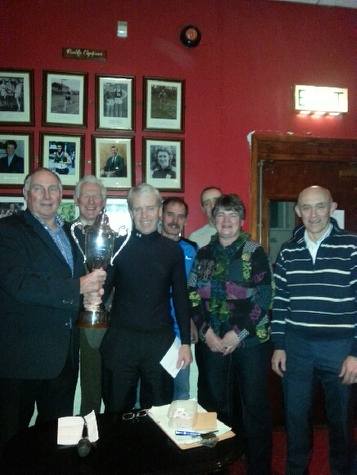