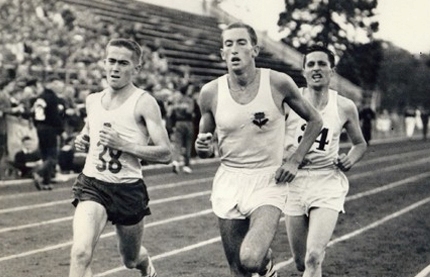 Frank White was a long serving member of Clonliffe Harriers as both an athlete and administrator. He competed in the summer of records at Santry Stadium in August 1958, although representing Annadale rather than Clonliffe at that stage, he ran in the two mile on the 8th of August 1958 where Albie Thomas (AUS) set a world record. The picture here shows Frank (number 34) sitting on the shoulders of the pacemaker Herb Elliott with Albie Thomas (number 38). After Frank’s distinguished athletics career was over he continued to serve Clonliffe Harriers and was the club’s Honorary Secretary for a long number of years and indeed died in office.

The Frank White Cup was originally presented to the club by his family to commemorate his memory and was presented to the winner of the short lived Clonliffe 5 mile road race which ran in the late 1980s. In 2012 the race was revived, although for traffic reasons, became a track race as part of the Grand Prix Series.

The Grand Prix sub committee have confirmed that there is a huge entry in this years Grand Prix Series and it is expected that there will be a big field in tomorrow night’s race. It is going to be difficult for officials on the night with such a big field competing over 20 laps and the sub committee have, therefore, appealed to any people who are not running to come up tomorrow night to officiate. Anyone who officiates tomorrow night will be exempt from assisting with other races throughout the course of the Series. The presentation of prizes in the Frank White Cup will take place in the club bar post race.

There have also been some date changes made to the 2013 schedule with the O’Connor Cup now moved to the 18th of June, the club 10,000 metres for the Bonass Trophy moved to the 12th of September and the Walker Cup, four mile track race, to the 24th of September. In addition there are still four races without a sponsor so if anyone is interested in sponsoring one of these races please contact Eoin Murray (087 292 7862).