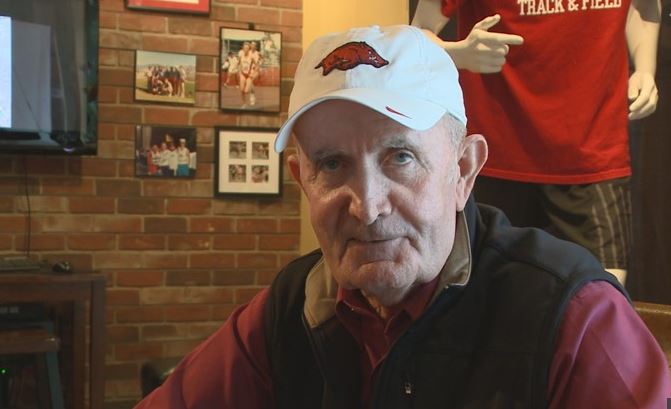 Legendary Clonliffe Harrier John McDonnell passed away overnight (June 7th) in Fayetteville, Arkansas, USA aged 82. Originally from County Mayo John came to Dublin in the late 1950s joining Clonliffe Harriers and enjoyed great success with the club winning his first national titles in 1962, the 1 mile title in a time of 4.09.50 and also the 3000 steeplechase that same year. On the country he led the Clonliffe cross country team to national silver on two occasions with a highest individual place position of eighth. A scholarship to Emporia State College, Kansas saw him make the transatlantic journey where he became a six time all American at track and cross country.

As his athletics career concluded he took up coaching initially at high school level before taking up the position of cross country coach at the University of Arkansas in 1972. Over the following years until his ‘official’ retirement from the position in 2008 he became the most successful coach in NCAA history as Arkansas took an extraordinary 40 championships under his stewardship: 19 indoor, 11 cross country and 10 outdoor track. In all he coached 105 NCAA individual champions. Add into that coaching 23 Olympians including Clonliffe pairing Niall Bruton and Alistair Cragg and Irish legends Frank O’Mara and Paul Donovan and the word legend is certainly appropriate. John McDonnell was US National Coach of the Year 12 times in indoor track, 11 times in outdoor track, and seven times in cross country for a total of 30 awards. He was Conference Coach of the Year a remarkable 47 times, and District Coach of the Year 61 times. He also was awarded the NCAA Mideast Regional Coach of the Year in three straight seasons (2003-05).

Our thoughts are with our fellow Harriers’ family at this time.