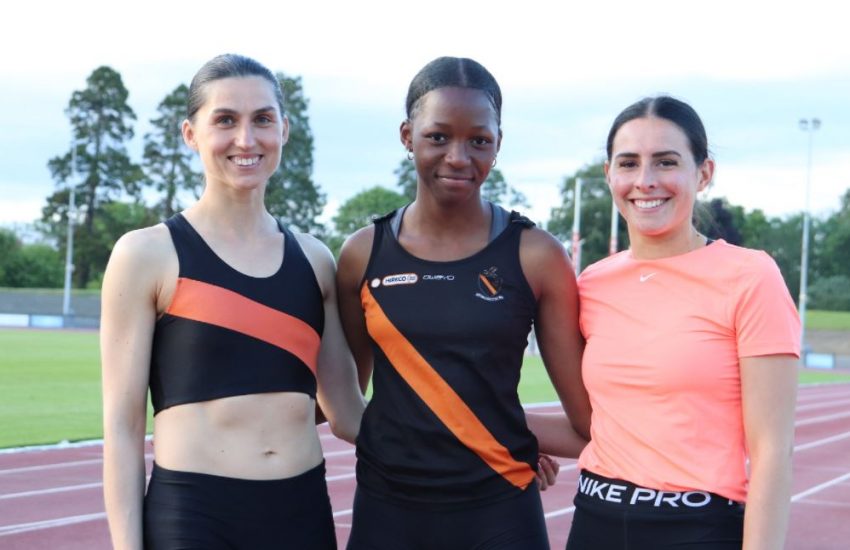 With the ongoing easing of restrictions the world is a brighter and livelier place. The feelgood vibe continued on a balmy but windy night in Morton Stadium for the first night of the 2021 Clonliffe Harriers club Championships. On offer tonight for the sprinters was the classic 100, attracting two full fields for both the men and women’s races and for the middle distance athletes the metric mile, the 1500. That latter event drawing race hungry Clonliffe athletes in their droves so much so that tonight we featured 1/2 dozen races, two for women and four for men. All these races were graded meaning that there was competitive racing for all throughout the course of the tight 60 minute program.

Highlights tonight included quality 100s, essentially a wind sprint as the opposite straight was used to give a tail wind instead of the usual head wind. The men’s race was won by guest Simon Archer (10.7) with Leo Morgan 2nd (10.8) and winning the club championship, next was Keith Pike (11.1) and then young Keith Burke (11.5). The women’s 100 was also a great race which was won by up-and-coming starlet Sally’s Sumola in a fine 12.4 from Leah Bergin, normally a 400 specialist 12.7 and 3rd Snezana Bechtina 13.1.

In the 1500s there were full fields in all races basically split into the requisite pods which had been graded and therefore provided great races throughout the night. The women’s A race provide a brilliant battle, Laura Tuite took the race by the scruff of the next with some brave front running and was rewarded with a 4.53.9 win. Behind her there was a great scramble for 2nd with new Harrier Laura Power grabbing the spot 4.55.2, 3rd Jenny Johnston 4.55.5, a PB and Sarah Bateson 4.55.8. Super stuff!

Niall Sherlock took a fine win in the B race 4.33.7, with the fast finishing Ronan Donohue 2nd in 4.36.2 and Jack Woods, who had made a brave, but ultimately unsuccessful bit for glory from 600, 3rd in 4.39.2. Great also to see Danny Collins and Stephen Harkness made a return to racing after maybe a decade since either last raced. Scott Crowley prevailed in the C race in 4.42.7 from Mick McMahon and Devon Morrissey. Anthony Doran was a comfortable winner of the D race in 5.06.8 well clear of Dave Commiskey and Declan Grant. Likewise Emma Dunne was a class apart in the women’s B race winning in 5.29.7 from Aimee Ahern and Clodagh Moriarty.

A huge thank you to the officials who turned out, to the coaches of the various groups who cooperated fully with deferral of training to ensure that we could hold these championships safely and to the athletes for their compliance with these strange regulations, which hopefully will come to an end in the not too distant future, once again it was a team effort which ensured a fantastic first night ‘at the Proms’. Next up on Thursday week, June 17, is the 200 and 800. Entry to that night will open on Friday.