Eoin Murray reports: The Irwin cup took place on a cold chilly December afternoon. Close to 40 athletes toed the line and braved the weather and soft underfoot condition to cover the 6k course. There were a number of hardy souls out supporting the race too and a huge thanks to those that gave up their Saturday to help out in the officiating, measuring,marking and taking down the course. It was a great race and brought an end to the 2012 races.
The winter sun shone brightest on Conor Moore who has just turned 14, he took on the more experienced (older) runners to win by 6 seconds to Liam Hennessy and Shay Byrne in third place. Conor started 3 mins 50 seconds behind the first starter and won in his time of 26 minutes and 40 seconds. As Conor is not yet (note the yet) a member of Clonliffe Harriers, the cup was presented to Liam Hennessy who once again caught the handicapper out. Hopefully we will see Conor in a black and amber singlet soon representing Clonliffe. It was also a deserved win for Liam who has been putting in the hard work on the track, and Malahide where he was spotted doing sneaky sessions on Wednesdays. 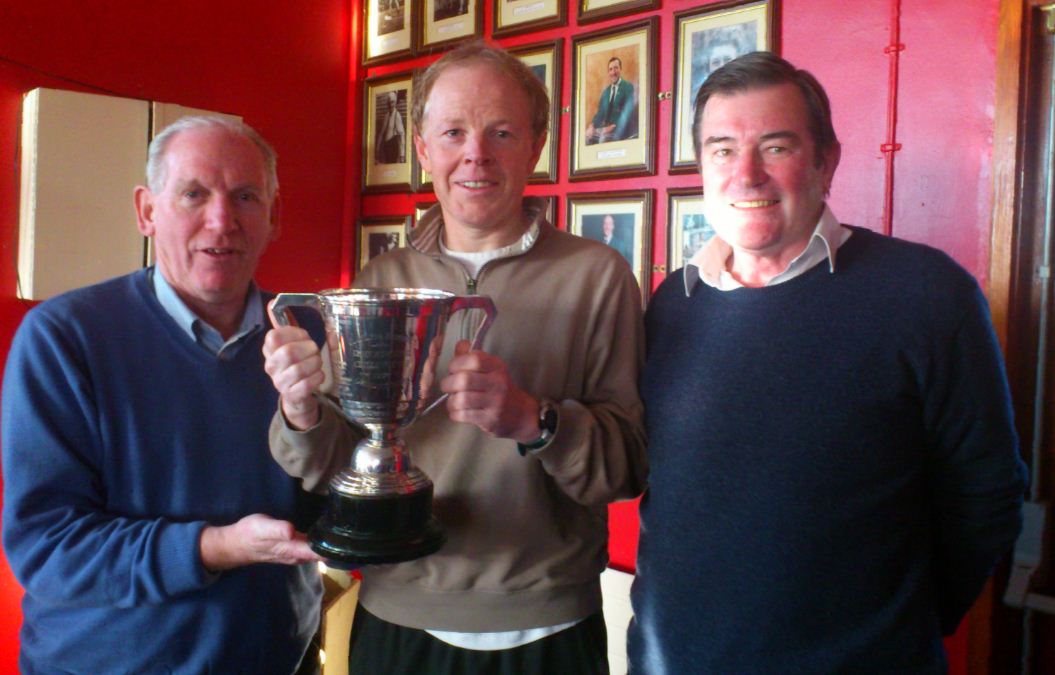 Joe Cooper,   Irwin Cup 2012 Winner Liam Hennessy  and Dominic Braningan
The presentation took place in the club bar after the race where the race sponsor Dominc Branagan was on to hand to present the prizes and to regale us with a story about Herbert Carmichael Irwin and his athletic prowess. Dominic, the club historian was reading from an extract of the book about the club history, that is to be published imminently  in an Irwin Cup scoop Dominic revealed .A brief history of the achievements of Irwin in particular in  1914 when he won both the National Junior and Senior CC Titles, 1914 was also the first time that Clonliffe won the Senior team and individual titles in the same year”.
Joe Cooper, the club captain was also on hand to present the cup over to Liam. Many thanks to Dominic for sponsoring the 1,2 and 3 in the race and also the prize for fastest athlete which was Eoin Murray in a time of 22 minutes 12 seconds. As always, our thanks to Caroline Tuite for providing the tea.cake and buscuits.
Results as follows, apologies if your names does not appear on the list, it was an open handicap, it was very difficult to identify the finishers as they finished together.
1. Conor Moore
2. Liam Hennessy
3. Shay Byrne
4. Aimee Ahern
5. Frank McCarthy
6. Shane Casey
7. Eoin Murray
8. Richie Barr
9. Conor Keane
10. Martin Kavanagh
11. Dave Dunwoody
12. Sean Doran
13. Desie Shorten
14. Declan Murray
15. Karen Kinsella
16. Clodagh Moriarty
17. Clive Ahern
18. Joe Phipps
19. Ray Dunne
20. Pat Byrne
21. Colm McDonnell
22. Rob Beckett
23. Bernie Byrne
24. Collette McKenny
25. Sinead Duffy
26. Brendan Donnelly
27. Terry Mee
28. Pat Timmons
29. Colm Doran
30. Gerry McCabe
31. Fergus Wheatley
32. Pat Bonass
33. Paddy Tuite
34. Fergal O’Shea
35. Philip Matthews
36. John McCormack
37. Murray Ahern
38. Pat Devitt