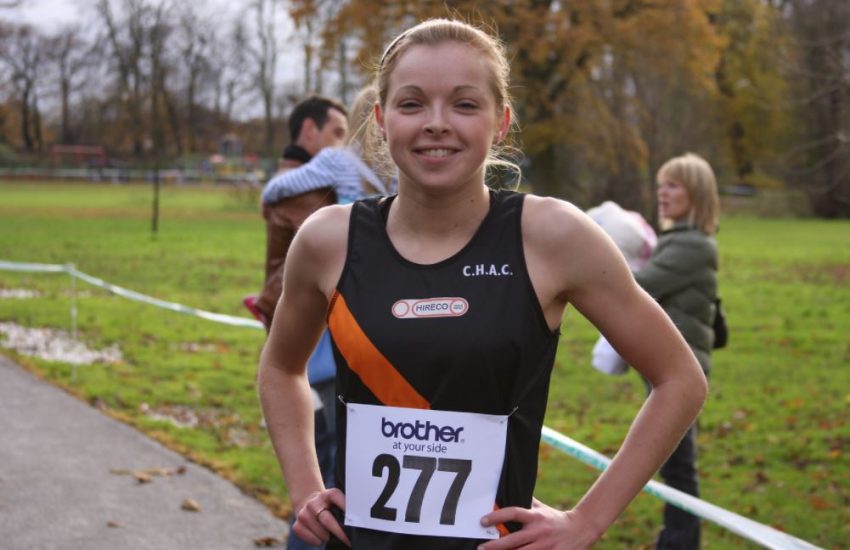 All of a dozen years ago today, (doesn’t time really fly ?), Clonliffe Harriers marked the 45th anniversary of the founding of the Clonliffe Harriers women’s section with a spectacularly successful ladies day. The event was the brainchild of Noreen Keane. Noreen put in Trojan work in organising the event including those beautiful still to be seen, and much sought after, Clonliffe pink ladies T-shirts.The attendance on the day included many of the original Clonliffe ladies from the 1960s including Ann O’Brien, Jean O’Neill, Claire Dowling and Frances Mansfield.

The day got underway with races for the new generation as the young Clonliffe girls races on an inner lap of Santry Demsene, a number of these young athletes have thankfully remained with the club and graduated to the senior ranks including Laura Tuite and Lauren Carr. There then followed a race over 600 yards. This race distance mirroring that very first Clonliffe ladies club race which had taken place on 17 December 1963 around the corner on Santry Avenue and was won by Claire Dowling . The 2008 45th Anniversary Race was won by Sarah Woods, probably more noted as a 400 hurdler. There was then a 5K race which featured many of the current Clonliffe athletes including the captain of the lady section Bronagh NiBhrian, Becky Woods, Ailish Malone and Emma Cooper to name but a few and returning athletes for the occasion including Ann Archibald and Katheryn Wally. An outstanding day was finished off with a fantastic reception held in the clubhouse and attended by all including fittingly Yvonne Morton representing her father Billy and the Morton family.