Morton Games today announced details of a great athletics club offer which opens on the 2nd of May and will run throughout the month of May or until the first 1000 tickets under the offer have been sold. The May only offer to clubs is purchase 20 tickets and only pay for 10.

In announcing the offer Meet Director Noel Guiden said: “We would like to see as many of our clubs as possible in attendance at the Morton Games on July 12th and for these clubs to bring as many of their athletes, coaches, juvenile athletes and indeed parents of juveniles to the Morton Stadium to witness for themselves a night of world class athletics.”

He continued: “In recent years those who attended the Meet have witnessed some fantastic athletes in action in Santry and have witnessed outstanding athletics.  The stadium record books have been rewritten in Santry as a result of recent Morton Games – who will ever forget 2014 when there were 9 new stadium records set on the night or indeed last year’s Meet when there were a record number of sub 4 minute miles in an event on Irish soil – 11 out of the 12 finishers broke 4 minutes.”

Morton Games would love to see the Athletics Clubs of Ireland come along to the Meet in great numbers – indeed bring your club colours and in addition to supporting international athletes support Ireland`s athletes and your club mates who will be competing on the night. 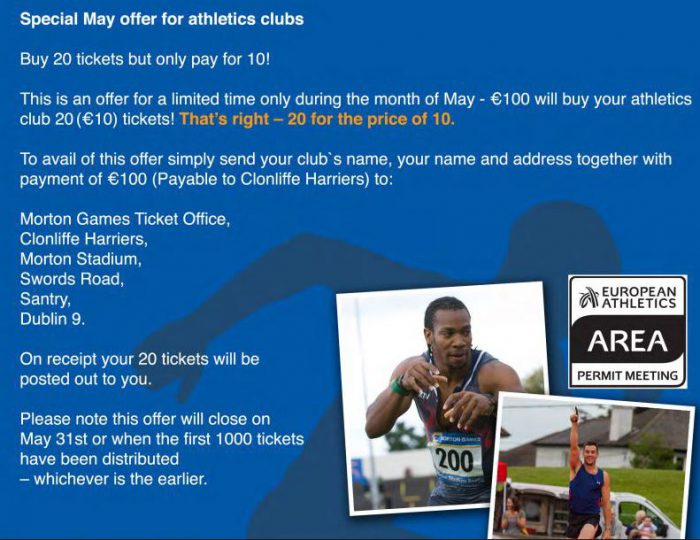