A different day all together today in the Morton Stadium as yesterday`s perfect day was replaced with a more traditional track and field day: chilly, windy and rainy! The North Leinsters was held in the stadium with as would be expect a big contingent of Clonliffe athletes in action for their schools. 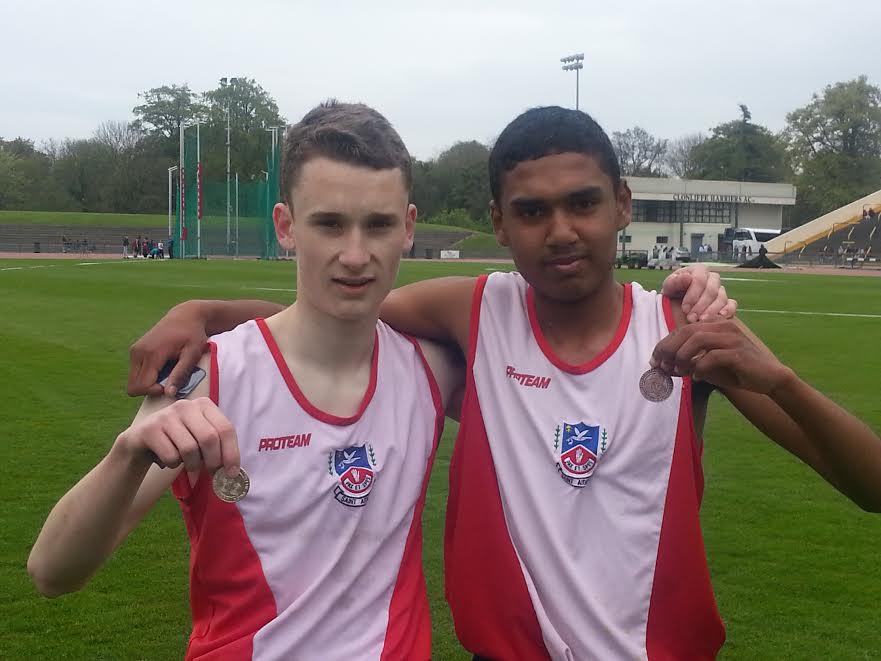 The middle distance events proved a happy hunting ground for the club`s athletes with several top class efforts. In the race of the day, the inter boys 800 Joseph Hession was simply superb. Joseph, a first year inter, took the pace on from the off, lead at the bell with club and school mate Greg Hosseny poised on his shoulder. Down the back straight Joseph went and then on the home straight he battled stride for stride remaining strong and holding on for a great win in a fast 2.04, Greg with a 2.06 run was 3rd.

In the 1500 inter race Cathal Doyle was pure class taking a fine win in 4.13. Cathal was chased home by school and club mate David O`Hanlon with a pb of 4.23.

The senior boys “Group of Death” 1500 saw Ross Kearney put in a strong performance in a loaded field to finish 6th. Laura Tuite despite nursing an injury stayed focus to safely get through to the Leinster finals as she placed 2nd in the senior girls 1500.

Alannah Cooley found the pace in opening lap of the inter girls 800 too hot to handle, a 68 seconded opener doing the damage as she placed 5th in 2.34.9. An hour later Alannah bravely stepped back into the fray and ended up in the most unlucky 4th in the 1500 (5.15.5)

Fintan McManus qualified for the junior 800 final, with a 3rd place finish from a heat of 20 plus! The in the final he had a good run placing 7th. In the senior boys 800 Josh Stubbs ran 2.09 finishing 6th. Mario Bowden successfully negotiated the inter 400 heats to take his place in the final where he was 5th. 3rd place in the inter 400 heats for Alex Gibbons and David O`Hanlon meant that they failed to progress any further. Also in the 400`s Kate Hession was 5th in the senior girls final. There were two Clonliffe athletes in the minor boys 500 both of whom ran very well Jack Horan was 4th and Stephen Cashin 9th.  Sean O`Leary competed in the junior high jump and made good progress finishing up in the top 10.

Finally in the distance races Adam O`Brien made it through to the inter 3000 Leinsters with a 3rd place finish. Hope Saunders in the girls senior 3000 was 4th and to round off the day Niall Norman was 6th in the senior 5,000.

Meanwhile over at the Irishtown Stadium Megan Coomber took an excellent double winning the senior Long Jump with a fine jump of 5.39m and also the senior 100. Another win was notched up by Amy Connolly in the junior long jump. While in the inter 800 Stephanie McCaul was 5th.

So in all a most successful day for the club`s young athletes.