Now with less than two weeks to go, Friday week, July 22nd things are hotting up. www.mortongames.ie has all the latest updates:

The winner of last year`s 800 in a meet record of 1.59.89 Angie Petty will return for July 22nd`s Morton Games. The New Zealander has a pb of  1.59.03 which she set while winning the World University title in 2015 while use this race as part of her build up to the Rio Olympic Games.

Rio will be Angie`s first Olympic Games, but she has a wealth international experience behind her approaching the Games having competed at two World Championships in Moscow 2013 and Beijing 2015, at the World Indoor Championships in 2014 and was a finalist at the 2014 Glasgow Commonwealth Games (5th place).

Kyle Langford (GBR) the reigning European Junior champion is a confirmed starter in the Muscle Clinic Men`s 800 at Morton Games. Langford took the junior title in Sweden in July of last year. Two years previously he was a bronze medallist at the World Youths Championships, he has also competed at World Championsip level, running in Beijing last year, and has competed in the Diamond League finishing 5th in the 800 at the 2015 London Diamond League where he recorded a new pb of 1.45.78.

Morton Games is delighted to have the confirmed return to Santry of ace pole vaulter Jeff Coover (USA). Coover last competed in the meet in 2013, unfortunately his schedule since has not brought him back to Europe until now. With a 5.68m pb and an sb of 5.50m set at last weekend`s US Olympic trials he may well be the man to beat on July 22nd.

More updated closer to the meet. 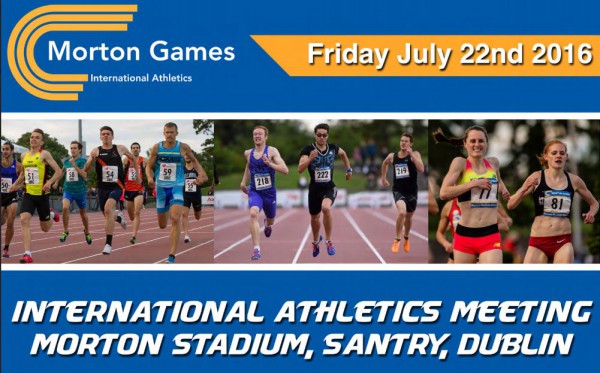